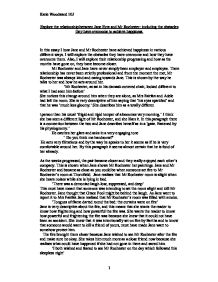 Explore the relationship between Jane Eyre and Mr Rochester; including the obstacles they have overcome to achieve happiness.

Explore the relationship between Jane Eyre and Mr Rochester; including the obstacles they have overcome to achieve happiness. In this essay I how Jane and Mr Rochester have achieved happiness in various different ways. I will explore the obstacles they have overcome and how they have overcome them. Also, I will explore their relationship progressing and how as the months have gone on, they have become closer. Mr Rochester and Jane have never simply been employer and employee. There relationship has never been strictly professional and from the moment the met, Mr Rochester was always kind and caring towards Jane. This is shown by the way he talks to her and how he acts around her. 'Mr Rochester, as sat in his damask-covered chair, looked different to what I had seen him before' She notices this change around him when they are alone, as Mrs Fairfax and Adele had left the room. She is very descriptive of him saying that 'his eyes sparkled' and that he was 'much less gloomy.' She describes him as a totally differen t person than his usual 'frigid and rigid temper of a becomes very morning.' I think she has seen a different light of Mr Rochester, and she likes it. In this paragraph there is a connection between the two and Jane describes herself as in a 'gaze. ...read more.

By this, it confirms that Mr Rochester was concerned about Jane when he was gone, and he did was not keen on leaving Jane alone with someone that was near death, but he had no choice as Jane was the only one he felt he could confide in and she was the only one out of all the servants he could really trust. This experience has shown the reader that they have become closer, but I do not think that it is obvious to Jane and Mr Rochester. Jane does not realise that Mr Rochester has told her in confidence and in trust about Mason but she just thinks it was she, out of all the servants that he chose. I think that Mr Rochester believes that Jane has realised that he is doing it because he trusts her when she hasn't. Mr Rochester is very forward towards Jane for the time that this is written in. It would have been seen as inappropriate to say what Mr Rochester says to Jane. He acts as if he fell in love with her the moment he saw her. 'When once I had pressed the frail shoulder, something new-a fresh sap and sense-stole into my frame.' He is explaining the first time he met her as if she renewed him. He talks to her in a very confident way and he knows what he wants and will do anything to get it. ...read more.

'Her very fingers! Her small, slight fingers! If so there must be more of her.' He has been longing for this moment, and from it to come true is the most magnificent thing in the world. To make things even better Jane is now an independent woman, and she does not have to feel guilty when the wealthy Mr Rochester wants to spend money on her. Now she is wealthy she can treat him too and she will not feel down for not being able to give him something in return. In the end the pair get married and they did thus because all the experiences they have had to overcome have brought them so close together. To realise that the person you thought was just your employer is actually your soul mate must be a wonderful feeling but it took a prolonged time for it all to happen. The book ends where Jane and Mr Rochester had been married for 10 years. 'I know what it is to live entirely for and with what I love best on earth.' Meaning Mr Rochester Jane obviously adores him. She also says that the circumstances of him being blind may have brought them closer. When Mr Rochester regains his sight partially and can hold his son and be able to see him must have been an emotional moment for Jane. Mr Rochester and Jane are perfect for each other and the way their marriage has come about is a terrific story. Katie Woodward 10J 1 ...read more.