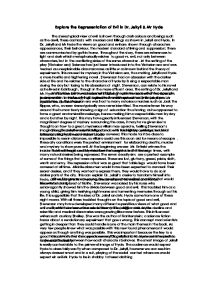 Explore the representation of Evil in Dr. Jekyll and Mr. Hyde

Explore the Representation of Evil in Dr. Jekyll & Mr Hyde The stereotypical view of evil is shown through dark colours and beings such as the devil, these contrasts with murders and killings as shown in Jekyll and Hyde. In Dr. Jekyll and Mr Hyde the views on good and evil are shown through characters appearances, their behaviour, the modern standard of living and suppression; there are communicated by gothic horror. Throughout the story, there are references to light and dark which metaphorically relates to good vs. evil, not only between characters, but in the conflicting sides of the same character. At the setting of the play (Victorian era) Science had just been introduced into the Victorian era and was treated as unexplainable circumstances as little was known behind the theory of experiments. This caused for mystery in the Victorian era, thus making Jekyll and Hyde a more horrific and frightening novel. Stevenson had an obsession with the darker side of life and he relates to the character of Hyde by being a respectable man during the day but losing to his obsessions at night. Stevenson, can relate to his novel as he lived in Edinburgh, though in the more affluent area. ...read more.

He is infamous for his horrific actions such as trampling over a little girl and for the murder of Sir Danvers Carew, despite this he still appears to hold a civilised manor whilst talking to his associates; however, he still appears to be blunt, rash and eager to avoid convocation. Mr. Utterson also has an inexplicable presence; he is described as "the last good influence in the lives of down-going men". This gives the reader the impression that this story is going to result with the end of someone's life. It is apparent that in this book, Mr. Hyde represents the beast in man. Every man toils with his fine side and his dark side; most people find a balance between these two faces. In Dr. Jekyll and Mr. Hyde, it is clear that Hyde is the malevolent side while Jekyll is the sincere side. Hyde is described as the beast in man because he appears to be unable so control his instinctual desires. This lack of self restraint is what separates him from the rest of the respectable society, isolating him and making him an enigma. Two major crimes are committed in Dr. Jekyll and Mr. Hyde. These are; the incident with the little girl and the Crarew murder case. ...read more.

This is where the entire story is unravelled. This is shown by a confession from Jekyll. He explains the reasons that everything was left in a will to Hyde, the correlation in the handwriting and the build up to the brutal murders. He also explains why many of his books and belongings had been defaced while he was in the form of Hyde. This is another symbol of the struggle between men and their beasts. As the novel progresses, it is noticeable that Hyde gets more and more quick-tempered and uncontrollable. He behaves like a lost soul in the grip of a gross heroin addiction, on the road to mans' ruin. When he encounters Utterson, his ferocity is less subtle on each occasion. This gives the reader the sense that something is definitely wrong. The title of Stevenson' The title of Stevenson's novel shows a relevant depiction of evil. The title shows metaphoric value showing the consequences of the repressed behaviour of a respectable male. All the crimes committed within the story can show a relation the Dr. Jekyll's mental state and emotions. Nobody wants to be controlled which shows why Jekyll loses control in order to take the form of this deformed being and exact his freedom. We can see throughout that freedom of the mind is the true evil in the Jekyll and Hyde. ?? ?? ?? ?? ...read more.