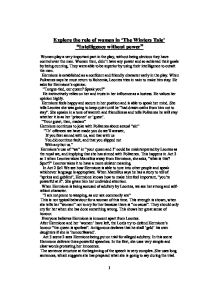 Explore the role of women in 'The Winters Tale'

Explore the role of women in 'The Winters Tale' "Intelligence without power" Women play a very important part in the play, without being obvious they have control over the men. Women then, didn't have any power and so achieved their goals by being cunning. They were able to be superior by using their intelligence to outwit the men. Hermione is established as a confident and friendly character early in the play. When Polixenes says he must return to Bohemia, Leontes tries in vain to make him stay. He asks for Hermione's opinion. "Tongue-tied, our queen? Speak you?" He instinctively relies on her and trusts in her influence as a hostess. He values her opinion highly. Hermione feels happy and secure in her position and is able to speak her mind. She tells Leontes she was going to keep quiet until he "had drawn oaths from him not to stay". She speaks in a tone of warmth and friendliness and tells Polixenes he will stay whether it is as her 'prisoner' or 'guest'. "Your guest, then, madam" Hermione continues to joke with Polixenes about sexual "sin" "Th' offences we have made you do we'll answer, If you first sinned with us, and that with us You did continue fault, and that you slipped not With any but us." Hermione's use of "we" in "your queen and I" could be misinterpreted by Leontes as the royal we, and implying that she has sinned with Polixenes. ...read more.

Paulina manages to persuade the Gaoler to let them go and see Leontes by stating that: "This child was prisoner to the womb, and is By law and process of great nature thence Freed and enfranchised" She is resourceful and firm in her sense of right and with these characteristics combined manages to outwit the Gaoler and gain control over the situation. Paulina enters the palace with the infant, but the servant, her husband and the Lords try to prevent her "You must not enter". Paulina believes she is able to "purge him of that humour" and expects the support of her husband and the Lords "be second to me". Paulina is very persistent and believes she has the power to make Leontes come to his senses. Although she uses the language of power, the reality let's her down that she has no power and it is inevitable that her plan will not succeed. Her first words to Leontes are telling him they need to discuss who the godparents are going to be "About some gossips for your highness". This shows Paulina as being tactless but she is trying to invoke a positive response from him. Whatever her intentions are it's not the correct way to handle things in view of Leontes mental state. Throughout Act 2 scene 3 we see the strong side of Paulina as she quarrels with Leontes. ...read more.

"This is the prettiest low-born lass that ever an on grassward" She is more confident than most women. She doesn't need compliments to reassure her of the way she looks, "Your praises are too large". She is suggesting that she doesn't need to rely on other people, especially men. Not all women in the play are represented as being intelligent. Dorcas and Mopsa are country girls and would be uneducated. They do not behave as respectable young women. They act like this because they have not been brought up like ladies. We see them quarrelling like children to the dismay of the Clown. "Is there no manners left among maids?" They are more worried about men and love. Their purpose in the play is to provide an excuse for comedy. They illustrate the differences in attitude towards sex, between the two courts. Sex is discussed more openly in the Country of Bohemia, whereas in the Court of Sicilia, Leontes sees sex as a disease. The role of women in 'The Winter's Tale' is a very important one. Although they are not obviously prominent, they manage to stand up for themselves. They do something that isn't expected for the time, which is, they end up being more powerful than the men. They do this by using their intelligence to influence, manipulate and outwit the men. The women in the play are not typical women for the time and they do not want to be portrayed as typical women, because women are seen as weak. Word Count= 2429 I ...read more.