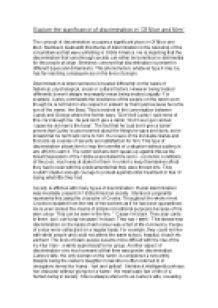 Explore the significance of discrimination in 'Of Mice and Men'

Transfer-Encoding: chunked ﻿Explore the significance of discrimination in ?Of Mice and Men? The concept of discrimination occupies a significant place in Of Mice and Men. Steinbeck deals with this theme of discrimination in the backdrop of the circumstances that were unfolding in 1930s America. He is depicting that the discrimination that runs through society can either be beneficial or detrimental for the people at large. Steinbeck conveys that discrimination is present in different types and dimensions. This phenomenon, whatever type it may be, has far-reaching consequences on the lives of people. Discrimination is when someone is treated differently on the basis of historical, psychological, social or cultural factors. However being treated differently doesn?t always necessarily mean being treated unjustly. For example, Curley commands the obedience of the people on the ranch even though he is not held in any respect or esteem by them just because he is the son of the owner, the Boss. ...read more.

They play cards in there, but I can?t play because I?m black. They say I stink?. This shows how discrimination on the basis of skin colour was a fact of life in America. People of colour were ostracized on a regular basis. For example, they could not live with white people and could not attend the same school, hospital, church etc. as them. The lives of black people became more difficult with the rise of the Ku Klux Klan - a white supremacist terror group. Another aspect of discrimination very much present at that time was gender discrimination. Curley?s wife, the only woman on the ranch, is considered a non-entity. Despite being the owner?s daughter in law she is often referred to in derogatory terms like ?tramp?, ?tart and ?jailbait?. Steinbeck intelligently portrays her character without giving her a name - the most basic fact of life of a human being in society. She is always referred to as Curley?s wife, revealing that she is seen as merely somebody?s possession. ...read more.

She is present on the ranch but is still agonizingly lonely. As she has a husband who doesn?t pay much attention to her, she desperately tries to find someone to talk to amongst the men on the ranch. The men are driven away from her as they believe that she is nothing but trouble. At one point she confides in Lennie, ?I get lonely. You can talk to people, but I can?t talk to nobody but Curley. Else he gets mad.? We can see that Curley?s wife is forced to abide by Curley?s rules because she has no say in the ranch and as a result she feels extremely lonely. These are the consequences of discrimination. Steinbeck has successfully achieved the purpose of conveying to his readers how discrimination was strongly prevalent in America in the 1930s. He has touched upon all the aspects of discrimination present at that time. Characters in the novel, in their actions and conduct bring out the theme of discrimination vigorously. All in all, it can be concluded that discrimination plays a significant role in Of Mice and Men. ...read more.