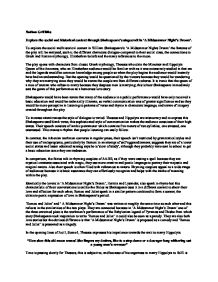 Nathan Griffiths Explore the social and historical context through Shakespeare's stagecraft in 'A Midsummer Night's Dream'. To explore the social and historical context in William Shakespeare's 'A Midsummer Nights Dream' the features of the play will be analysed, such a: the different characters dialogue compared to their social class, the connections to Greek and Roman mythology, Elizabethan beliefs and the many references to the moon. The play opens with characters from classic Greek mythology, Theseus who slain the Minotaur and Hippolyta Queen of the Amazons, who an Elizabethan audience would be familiar with as it was extensively studied in that era and the legends would be common knowledge among people so when the play begins the audience would instantly have had an understanding. But the opening would be questioned by the viewers because they would be wondering why they are marrying since they would be aware the couple are from different cultures. It is ironic that the queen of a race of woman who refuse to marry because they despises men is marrying; this is how Shakespeare immediately sets the genre of this performance as a humorous love story. Shakespeare would have been aware that many of the audience in a public performance would have only received a basic education and would be technically illiterate, so verbal communication was of greater significance and so they would be more perceptive in listening to patterns of verse and rhyme in characters language, and aware of imagery created throughout the play. To increase attentiveness the style of dialogue is varied. Theseus and Hippolyta are aristocracy and to express this Shakespeare used blank verse, this sophisticated style of communication makes the audience conscious of their high status. ...read more.

also swears by his 'best arrow with the golden head'; Hermia's promise has the same effect and power as Cupids arrow because, by this, the couple with be free to love each other. The repetition adds to this effect and increases the power of her speech. The colour of Venus' doves, white, is symbolic because it shows the innocence and purity of Hermias love for Lysander. Her promise will allow them to love each other away from the patriarchal tyranny of Egeus. The images of Venus and Cupid are not similar to those used by Hermia: "Love's heralds should be sunbeams...therefore do nimble-pinion'd doves draw love, and therefore hath the wind-swift Cupid wings." Juliet is anxious and thinks that her massage of love to Romeo should be as quick as her thoughts, faster than sunbeams which is how doves carry 'love', Juliet means Venus the Goddess of Love because her chariot is drawn by doves, which is why Cupid, her son, has wings that carry him as fast as the wind. Juliet believes that 'love' has the power to drive back 'shadows over louring hills'. Both Hermia and Juliet have references to Cupid and Venus because they are both in love but they use them in different ways. Lysander is poetic when planning there escape, he refers to the moon and speaks in rhyme: "Tomorrow night, when Phoebe doth behold her silver visage in the wat'ry glass, decking with liquid pearl the bladed grass-" Lysander plans to elope with Hernia tomorrow night when the moon is mirrored by the reflection of the 'wat'ry glass'. Phoebe is another name for Diana, the Goddess of Chastity and therefore the moon. ...read more.

when a sad old woman goes to sit down he slips from under her bum and laughs and puck also pretends to be a roasted apple in an old woman's ale so when she drinks he bobs up and down so it spills on her 'wither'd dewlap'. He also enjoys misleading people at night. Oberon sees the trouble between Helena and Demetrius so orders puck to sprinkle the juice of the 'love-in-idleness' flower on Demetrius' eyes so he will fall in love with Helena but he accidentally mistakes Lysander for Demetrius as they both wear the same 'Athenian garments' and so Lysander falls in love with Helena. Although Puck has an ill-behaved reputation this was not intentional. The tale of how the pansy got its name 'love-in-idleness' is purely from Shakespeare's vast imagination. He says Queen Elizabeth was a virgin because Cupid missed his target. Oberon saw how the Roman God Cupid took aim on the 'fair vestal throned by the west' with his fiery arrow but the moon took away its power as it is both associated with water and chastity. Queen Elizabeth was left 'fancy free' and the arrow fell to earth upon a milk-white flower turned purple with 'love's wound'. Busy people, like Queen Elizabeth, have no time for love that is why love is connected with idleness. Shakespeare probably wrote this play for a noble wedding where the guests would desire a light hearted performance at which they can laugh but nothing serious or intellectual as they would be happy and relaxed and would want a comedy. Shakespeare was popular with the monarch at the time: Queen Elizabeth 1, the virgin queen and the many references to Diana, the Goddess of Chastity would be in celebration of her virginity. ...read more.