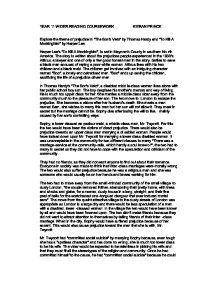 Explore the theme of prejudice in

YEAR 11 WIDER READING COURSEWORK KIERAN PRINCE Explore the theme of prejudice in "The Son's Veto" by Thomas Hardy and "To Kill A Mockingbird" by Harper Lee. Harper Lee's "To Kill A Mockingbird", is set in Maycomb County in southern North America. The story is written about the prejudices people experienced in the 1930's. Atticus, a lawyer and one of only a few good honest men in the story, battles to save a black man accused of raping a poor white woman. Atticus lives with his two children and a black maid. The children get involved with an intriguing character named "Boo", a lonely and ostracised man. "Boo" ends up saving the children, sacrificing the life of a prejudice driven man. In Thomas Hardy's "The Son's Veto", a disabled middle-class woman lives alone with her public school boy son. The boy despises his mother's manors and way of living. He is much too upper class for her. She marries a middle class vicar away from the community much to the pleasure of her son. The two move to London to escape the prejudice. She becomes a widow after her husband's death. She meets a man named Sam, she wishes to marry this man but her son will not allow it. They meet in secret but the marriage cannot be. Sophy dies after losing the will to live, mainly caused by her son's controlling ways. Sophy, a lower classed ex-parlour maid, a middle-class man, Mr. Twycott. For this the two would have been the victims of direct prejudice. There would also be prejudice towards an upper class man marrying a disabled woman. People would have looked down upon Mr. ...read more.

In "the son's veto", Sophy can escape the prejudice but only at the expense of her own comforts and morals, she can disguise the fact that she is in an inter-class marriage or romance. Sophy receives a large majority of the prejudice from her own son. Her son "belonged to a well-known public school" this indicates snobbery and a contrast in class. He has very different views and has control of his mother's life. Early on in the story we witness her son criticising her dialect "Has, dear mother - not have!" this shows her lack of education and his prejudice and "impatient and fastidious" feelings toward her. The son reprimands her "surely you know that by this time!" The son has been going to school around middle, and upper-class students. Their lifestyles have moulded his own and he is no longer of the same class as his mother is. There is now a lack of communication because of this class difference "The boy went onward in silence". The son hears of his mother's plans to marry Sam, a young gardener "The man alongside was, as she had fancied, Sam Hobson, formerly gardener at Gaymead, who would at one time have married her", the son becomes livid and refuses to allow her to marry a poor gardener. She becomes secretive in meeting with him, "You can be home again in a cab before anybody is up", and she doesn't want her son to find out. The son is class prejudice and feels strongly against her marrying a man of a lower class, "He hoped his stepfather would be a gentleman? He said" because of this prejudice she won't accept Sam's proposal, " the youth's face remained fixed for a moment; then he flushed, leant on the table, and burst into passionate tears", the boy is emotional because he is so class prejudice. ...read more.

Her son had slowly sucked the life from her by denying her happiness and not accepting any defiance from her weakening mind and body. Both Sophy and tom were vulnerable to their surroundings. Tom walked past Mayella everyday and ironically it was her that decided his fate for him. Sophy suffered from her own family and her own community. She suffered prejudice because she was disabled, a woman and had relationships between different classes. Both the communities were small minded and this caused the sad deaths of both Sophy in "the sons veto" and Tom in "to kill a mockingbird" All this prejudice should not have been allowed to flourish in such different communities. In England, women were made to stay at home and Sophy would have suffered from this prejudice, now that she was disabled and was not able to do this any longer. In history people were less protected from themselves and the prejudice around them. There would have been no way to prevent Sophy's death, her son had to look after her and it was him who decided her fate. Cases like Sophy's would have been common because there was no way to protect her from her won son and community. In the southern states racial prejudice flourished. Black people were treated as inhuman aliens and made to drink form different fountains, they always had to make way for a white person if he was approached on the pavement by a white man. All this because they had a difference in skin colour. Cases like Tom Robinson happened too often, as people were too happy to blame the blacks for any faults or crimes they had committed. Blacks were used as slaves and as an easy answer to the white people's problems. ...read more.