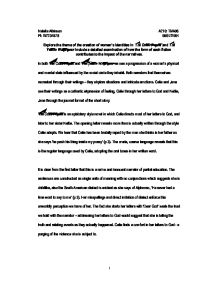 Explore the theme of the creation of women's identities in The Color Purple and The Yellow Wallpaper. Include a detailed examination of how the form of each fiction contributes to the impact of the narratives.

Natalia Atkinson PI: W7234978 A210: TMA05 05/07/2004 Explore the theme of the creation of women's identities in The Color Purple and The Yellow Wallpaper. Include a detailed examination of how the form of each fiction contributes to the impact of the narratives. In both The Color Purple and The Yellow Wallpaper we see a progression of a woman's physical and mental state influenced by the social circle they inhabit. Both narrators find themselves recreated through their writings - they explore situations and intricate emotions. Celie and Jane use their writings as a cathartic expression of feeling, Celie through her letters to God and Nettie, Jane through the journal format of the short story. The Color Purple is an epistolary style novel in which Celie directs most of her letters to God, and later to her sister Nettie. The opening letter reveals more than is actually written through the style Celie adopts. We hear that Celie has been brutally raped by the man she thinks is her father as she says 'he push his thing inside my pussy' (p 3). The crude, coarse language reveals that this is the regular language used by Celie, adopting the oral tones in her written word. It is clear from the first letter that this is a na�ve and innocent narrator of partial education. The sentences are constructed as single units of meaning with no conjunctions which suggests she is childlike, also the South American dialect is evident as she says of Alphonso, 'He never had a kine word to say to me' (p 3). ...read more.

As Shug says; 'God love admiration. I think it pisses God off if you walk by the color purple in a field somewhere and don't notice it.' (p.167) Through learning to appreciate her surroundings Celie has allowed her mind to grow sufficiently to recreate herself as a courageous independent woman. Shug's 'free and easy' colloquial dialect appeals to the reader, as it does to Celie, as it carries the essence of truth. Celie subverts the victim in herself, which was instilled at an early age, to become a woman of her own means. She sets up her own appropriately named business 'Folkspants Unlimited'. This is a complete reversal for Celie - not only is she wearing the trousers she is now making them. It is significant that she plans to make pants for Sophia, 'one leg be purple, one leg be red.' (p. 184) Celie retains her earthy dialect throughout the novel and although Darlene tries to teach her Standard English pronunciation Celie appears to be disinterested. 'Look like to me only a fool would want you to talk in a way that feel peculiar to your mind.' (p. 184) She has evolved and Natalia Atkinson PI: W7234978 A210: TMA05 05/07/2004 created herself as a woman and now needs no more adjustments to be truly content with herself. The Yellow Wallpaper also follows the emancipation of Jane, the first person narrator, but it is a psychological descent as opposed to Celie's uplifting liberation. ...read more.

The wallpaper, like a story, becomes a text and a subtext - the same as her personality. There is the legible appearance but underneath is an unhappy woman vying for a life she is denied. The woman she sees creeping around outside is her subliminal self. Natalia Atkinson PI: W7234978 A210: TMA05 05/07/2004 In her sinking psychosis she desperately tries to free herself by tearing down the wallpaper to let out the woman behind. 'I pulled and she shook [...] before morning we had peeled off yards of that paper'. (p. 357) When John arrives we finally hear the narrators name as she says 'I got out at last [...] in spite of you and Jane.' (p.359) She sees her former self as part of her confinement and her submission to rule. By following her route to madness she has unlocked the door to her creativity and rebellion to detainment. The Yellow Wallpaper leaves the reader feeling decidedly uneasy compared with The Color Purple that elevates the reader's soul. Both choose very intimate forms and although we know Jane has fallen into her own madness, we still feel sympathy. The reason being that the form of the novella is a compact form and points symbolically to everything that keeps her chained and we trust that she is truthful. Both Gilman and Walker pioneered for feminist issues and female emancipation and both wanted to write something that could potentially shock the reading audience into action. I do not believe that there is any doubt in that they did achieve this. ...read more.