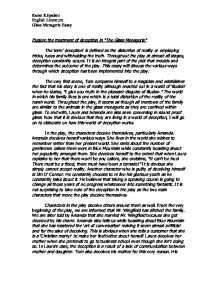 Explore the treatment of deception in &quot;The Glass Menagerie&quot; The term 'deception' is defined as the distortion of reality or employing tricks, ruses and

Explore the treatment of deception in "The Glass Menagerie" The term 'deception' is defined as the distortion of reality or employing tricks, ruses and withholding the truth. Throughout the play at almost all stages, deception constantly occurs. It is an integral part of the plot that moulds and determines the outcome of the play. This essay will discuss the various ways through which deception has been implemented into the play. The very first scene, Tom compares himself to a magician and establishes the fact that his story is one of reality although enacted out in a world of 'illusion' when he states, "I give you truth in the pleasant disguise of illusion." The world in which his family lives is one which is a total distortion of the reality of the harsh world. Throughout the play, it seems as though all members of the family are similar to the animals in the glass menagerie as they are confined within glass. ...read more.

It is not surprising to take note of the deception in the play as the two main characters that move the play deceive themselves. Characters in the play deceive others around them as well. From the very beginning of the play, we are informed that Mr. Wingfield has ditched the family. We are later told by Amanda that she married Mr. Wingfield because she got deceived by his charm. Amanda also tells us while boasting about Blue Mountain that she has mastered the 'art of conversation' making it seem almost artificial and for the sake of deceiving. This is obvious when she tells a customer that she is a 'Christian martyr' to make her feel better about herself. Laura deceives her mother when she pretends to go to business school even though she isn't doing so. In Laura's case, the deception is a result of a lack of communication between mother and daughter. Tom also deceives his mother for this very reason. ...read more.

Deception is used at this point as a means of withholding truth by getting everyone to participate in it. I would like to call it a deception orgy:). The tables however, soon turn. Jim ends up deceiving Laura when he promises to hold the unicorn safely and ends up dropping it. Similarly, he informs Laura about his girlfriend Betty despite seizing the moment and kissing her which not only steals her heart but leaves her in a momentary daze. After hoping that Jim would lead the family to salvation, it seems like it was never meant to be and Jim had deceived the family along with the reader from his very appearance. In conclusion, I believe that deception is a very central theme to the play as all characters mentioned in the play either deceive themselves, deceive others, individually or they almost conspire together to deceive. It is a result of their desperation socially and financially as well as a cause of a lack of communication between family members. Without deception, the play would not have taken its course. ?? ?? ?? ?? Karan Kirpalani English Literature Glass Menagerie Essay ...read more.