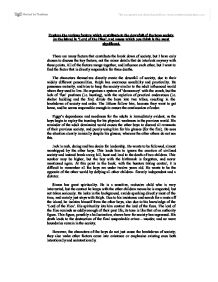 Explore the various factors which contribute to the downfall of the boys society on the island in 'Lord of the Flies', and assess which you think is the most significant.

Explore the various factors which contribute to the downfall of the boys society on the island in 'Lord of the Flies', and assess which you think is the most significant. There are many factors that contribute the break down of society, but I have only chosen to discuss the key factors, not the minor details that do interlock anyway with these points. All of the factors merge together, and influence each other, but I want to find the factor that is directly responsible for three deaths. The characters themselves directly create the downfall of society, due to their widely different personalities. Ralph has enormous sensibility and practicality. He possesses maturity, and tries to keep the society similar to the adult influenced world where they used to live. He organises a system of 'democracy' with the conch, but the lack of 'fun' pastimes (i.e. hunting), with the repletion of practical endeavours (i.e. shelter building and the fire) divide the boys into two tribes, resulting in the breakdown of society and order. The littluns follow him, because they want to get home, and he seems responsible enough to ensure the continuation of order. Piggy's dependence and neediness for the adults is immediately evident, as the boys begin to replay the taunting for his physical weakness in the previous world. His reminder of the adult dominated world causes the other boys to discard all remnants of their previous society, and purely using him for his glasses (for the fire). ...read more.

The beast may occur, however, we are never given a definitive answer as to whether that is the case or not. But the concept alone is enough to begin, if not finish, the collapse of society. The nature of the beast is one of the biggest questions for adults; not even the adults are sure as to whether it is real or not. The first incident with the beast comes in the form of the 'snake-thing', as told by the littlun with the mulberry coloured birthmark. The littluns feel threatened by this beast, as they have proof neither for nor against its existence. They are unable to be consoled and offered support by the older children, since they are unable to convince themselves that this beast is imaginary. The beast personifies fear itself, I feel. The fear gets even more out of control when the original reporter of the beast vanishes. This leads to the firm belief that the beast does exist. Even practical Piggy, who rebuts all claims of its existence, is unable to persuade the others that it is imaginary. All practicality vanishes, since the majority of the boys are not mature enough to care for the littluns, and it is against their nature. The only way they can combat their fear is by 'hunting' the beast. ...read more.

Jack is the first one to forget, and then he starts to realise what this island has to offer them. He focuses on rashness and fun, rather than order, organisation and practicality. Once he had forgotten the adult world, he had no desire to return to it and follow all its rules and regulations. The others soon followed in his path. The lack of adults is especially more important because of the isolation: with no adults, and no influences, it is inevitable that their society would break down. Yet, the very existence of the beast made the lack of adults even more influential, since children cannot convince each other to be logical, when they cannot even convince themselves. Perhaps if there were an adult presence of the island, the beast would have been dismissed. The shock we feel by the boys fighting with each other (because we cannot imagine boy fighting boy) is in itself ironic- the reason the boys are here on the island in the first place is due to the adults, the responsible figures, fighting. However, it can be concluded that the collapse of society was directly due to the varying characters of the boys. There is no order when you mix such widely varying, and often clashing, personalities of boys. When you have differing personalities, the obvious result is that they will from groups, but no longer work together, not just to escape the island, but they are not even prepared to do so to remain civilised. ?? ?? ?? ?? ...read more.

This essay has great potential - there are some interesting ideas and the writer clearly knows the novel well and is able to discuss some of the themes. However a more rounded approach is needed and some of the statements are sweeping. At times the essay loses focus on the question.
The main point of concern is that the only quote used is 'fun'. The essay needs more supportive quotes and so is only awarded three stars.