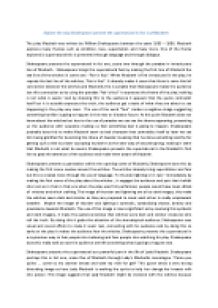 Shakespeare presents the supernatural in the Macbeth?s first line to grab the attention of the audience and make them aware of Macbeth. Shakespeare presents superstation within the opening scene of Macbeth; Shakespeare does this by making the first scene revolve around the witches. The witches already bring superstation and fear but this is created more through the use of language. ?In thunder lighting or in rain,? Immediately by making the first scene of the play about the witches , it engages the audience and puts their beliefs into test as in that in that era when the play was first performed, people would have been afraid of witches and witch crafting. The image of thunder and lightning are all so dark images, this make the witches seem dark and sinister as they are prepared to meet each other in really umpleasent weather. ...read more.

Shakespeare presents the supernatural as a powerful part in the life of Lady Macbeth. Shakespeare portrays this in Act one, scene five of Macbeth through Lady?s Macbeths monologue. ?Come you spirits ... come to my women breast and take my milk for gall? This quote sends a very strong disturbing image as here Lady Macbeth is evoking the sprits to help her change her breasts milk into poison. This image suggests that Lady Macbeth might be involved with the witches because she is calling upon the spirits like what the witch had previously done in the previous scene. The phrase ?Come you spirits ?makes the audience see Lady Macbeth as some kind of witch because she calling upon the spirits. This makes the audience curious, wanting to know what happens next because if Lady Macbeth is a witch, is Macbeth someone evil like her? Shakespeare really takes the attention of the audience, it curtsies them and interact with the audience. ...read more.