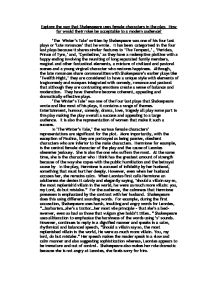 Explore the way that Shakespeare uses female characters in The Winter's Tale. How far would their roles be acceptable to a modern audience?

Explore the way that Shakespeare uses female characters in the play. How far would their roles be acceptable to a modern audience? 'The Winter's Tale' written by Shakespeare was one of his four last plays or 'late romances' that he wrote. It has been categorised in the four last plays because it shares similar features to 'The Tempest,' , 'Pericles, Prince of Tyre,' and, 'Cymbeline,' as they have a redemptive plotline with a happy ending involving the reuniting of long separated family members, magical and other fantastical elements, a mixture of civilized and pastoral scenes and a young virginal character who restores happiness. Although, the late romances share commonalities with Shakespeare's earlier plays like 'Twelfth Night,' they are considered to have a unique style with elements of tragicomedy and masques integrated with comedy, romance and pastoral that although they are contrasting emotions create a sense of balance and moderation. They have therefore become coherent, appealing and dramatically effective plays. 'The Winter's Tale' was one of the Four last plays that Shakespeare wrote and like most of his plays, it contains a range of themes. ...read more.

You, my lord, do but mistake." Her speech makes the reader speak in a slow and calm manner and also suggesting sophistication whereas, Leontes appears to be immature and out of control. Shakespeare also makes her role dramatic because she is not angry at Leontes, she feels sorry for him. Shakespeare also presents her role as dramatically effective partly because to do with the attitude of the other characters also being testimony to Hermione's character. The words of a minor character, a Lord, are typical: "For her, my lord...I dare lay my life down, and will do't, sir," he says to Leontes. No one other than Leontes has a bad word to say about Hermione, and Paulina is moved to defend her with all the energy she has. The fact that the other characters react so emotionally to defend Hermione proves her character to be so gracious. Leonte's reacts with extreme jealousy and over-the-top and erratic behaviour because he believes that Hermione has been unfaithful and this shocks even himself. He reacts in the way he does because to him she is perfect and he loves her so much and for her ...read more.

When Shakespeare first introduces Paulina to the audience, she is attempting to visit Hermione in prison. Her great power is demonstrated as she intimidates the guard who eventually defers to her authority and allows her entry to see her "gracious queen." Perdita provides the romance in the play and is the subject of Florizel's affections. Shakespeare gives him a number of speeches to direct towards Perdita, including, "When you speak, sweet...I'd have you do it ever: when you sing,...I'd have you buy and sell so, so give alms, ...Pray so, and, for the ord'ring of your affairs...to sing them too: when you do dance, I wish you...A wave o' the sea, that you might ever do...Nothing but that, move still, still so...And own no other function." Perdita is compared to Proserpina (a mythical God) who represents spring. Perdita is like Proserpina in that she, too, brings the spring, she is crowned with flowers, and dispenses them to all the guests, and the audience feels that with the introduction of Perdita "The Winter's Tale" takes a turn from the black and white ruins of Bohemia to the colourful, pastoral countryside introduced in Act 4. ...read more.