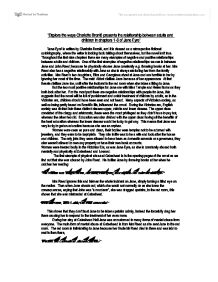 'Explore the ways Charlotte Bront� presents the relationship between adults and children in chapters 1-9 of Jane Eyre' 'Jane Eyre' is written by Charlotte Bront�, and it is classed as a retrospective fictional autobiography, where the writer is looking back talking about themselves, but the novel isn't true. Throughout the first nine chapters there are many examples of negative and positive relationships between adults and children. One of the first examples of negative relationships we see is between Jane and John Reed; because he physically abuses Jane constantly e.g. throwing books at her. Mrs Reed also has a negative relationship with Jane as she is always excluding her from the family activities. Mrs Reed's two daughters, Eliza and Georgiana shout at Jane and are horrible to her by ignoring her most of the time. The maid Abbot dislikes Jane because of her appearance. At first Bessie dislikes Jane too, until after the incident in the red room when she takes a liking to Jane. But the two most positive relationships for Jane are with Miss Temple and Helen Burns as they both look after her. For the most part there are negative relationships with people for Jane, this suggests that the novel will be full of punishment and unfair treatment of children by adults, as in the Victorian era, children should have been seen and not heard. Many aspects of Victorian society, as well as being partly based on Bront�'s life, influenced the novel. ...read more.

Another form of abuse is when Jane drops her slate she is punished by Mr Brocklehurst by being made to stand on a chair, with no food and she wasn't allowed to talk to anyone for a whole day 'Let the girl who broke her slate come forward' She is then isolated from the whole school, and made an example of. This shows the poor relationship between adults and children as they are punished in a hope to save them from evil. They have so little food because it is often inedible or when it is decent it is taken off them by the older girls, 'They would coax or menace the little ones out of their portion.' As well as the insufficient amounts of food, they are also clothed badly with thin clothes and no overcoats for the winter, 'Our clothing was insufficient to protect us from the severe cold', This means that many of them were very ill and when out walking their hands and feet became numb. This is due to Mr. Brocklehurst being very strict about their clothes and not allowing them to have decent clothing during the winter months, showing the negative relationship between him and the pupils at Lowood. As well as the physical abuse suffered at Lowood there is also lots of mental abuse. The main victims we know about in the novel are Jane herself and her friend Helen Burns. ...read more.

There is a contrast between Mrs Reed and Miss Temple because Mrs Reed is a mother and she should be able to bring up Jane as one of her own, but instead she refuses. Whereas Miss Temple is a very motherly figure even though she herself is not a mother and she mothers the whole school well and willingly. 'Saying god bless you my children' This shows that she sees all the girls at Lowood as her own children. Furthermore she is quite happy being seen as a motherly figure to the girls at Lowood as many of them don't have parents. In conclusion I believe that the relationship between adults and children in Jane Eyre is very unfair, and possibly exaggerated from the truth. Even though children were treated badly the punishments described in the novel seem rather too harsh and the living conditions too extreme. However this could be as Charlotte Bronte saw it, if she was a small child like Jane, who would have found the school a daunting experience, this could be the case as we know that the novel was based partly on her own life. The treatment of children in the Victorian Era was very different as it is today because most of the punishments used back then would not be acceptable now a days and severe action would be taken about whereas then it was seen as normal. Overall the relationships between adults and children in chapters I 1-9 of Jane Eyre are negative as would be expected as children should have been seen and not heard in those days.. ...read more.