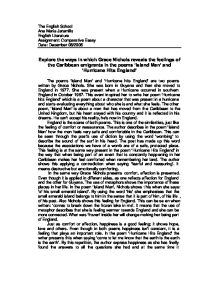 The English School Ana Maria Jaramillo English Literature Assignment: Comparative Essay Date: December 06/2006 Explore the ways in which Grace Nichols reveals the feelings of the Caribbean emigrants in the poems 'Island Man' and 'Hurricane Hits England' The poems 'Island Man' and 'Hurricane hits England' are two poems written by Grace Nichols. She was born in Guyana and then she moved to England in 1977. She was present when a Hurricane occurred in southern England in October 1987. This event inspired her to write her poem 'Hurricane hits England' which is a poem about a character that was present in a hurricane and starts evaluating everything about who she is and what she feels. The other poem, 'Island Man' is about a man that has moved from the Caribbean to the United Kingdom, but his heart stayed with his country and it is reflected in his dreams. He can't accept his reality, he's now in England. ...read more.

What was 'frozen' inside her will change making her being part of England. Just as comfort or affection, happiness is a good feeling; it shows hope, love and others. Even though in both poems happiness isn't constant, it is a feeling that plays an important role. In the poem 'Hurricane Hits England' the writer presents this when saying 'come to let me know that the earth is the earth is the earth'. By this repetition, the author express happiness as she has finally found the answers to all the questions she had and at the same time it represents that she now feels complete and part of something as she isn't confused anymore. On the other hand, the author shows in the poem 'Island Man' this feeling connected to the Caribbean, the way the Caribbean is described inspires happiness, colours and relaxation, just the way the man feels and sees in his dreams. This can be seen when Grace Nichols says: 'wakes up to the sea of blue surf in his head'. ...read more.

The fact that that line is separated from the rest of the text creates a tone of boredom. In conclusion we can say that in the poems 'Island Man' and 'Hurricane hits England' there are found a lot of significant feelings such as confusion, comfort, affection, resignation and happiness. These emotions sometimes change the course of the stories and let us know the cultural conflict between the life in England and the Caribbean. We could appreciate that Nichols' technique consisted in mixing opposite feelings that interact with each other and make poems more interesting. At the same time se uses metaphors to represent human feelings and her thoughts about the abandon of origin and culture. In my opinion the best poem was 'Hurricane Hits England' given that it was more helpful to be aware of the situation most people live, and to understand what people might be feeling. But most of all because it makes readers realize that it doesn't matter where we are, where we're from or our culture, we're still part of the earth. ...read more.