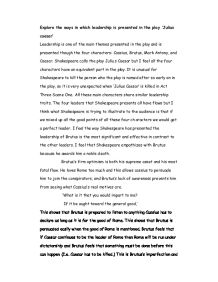 Explore the ways in which leadership is presented in the play 'Julius caesar' Leadership is one of the main themes presented in the play and is presented though the four characters: Cassius, Brutus, Mark Antony, and Caesar. Shakespeare calls the play Julius Caesar but I feel all the four characters have an equivalent part in the play. It is unusual for Shakespeare to kill the person who the play is named after so early on in the play, so it is very unexpected when 'Julius Caesar' is killed in Act Three Scene One. All these main characters share similar leadership traits. The four leaders that Shakespeare presents all have flaws but I think what Shakespeare is trying to illustrate to the audience is that if we mixed up all the good points of all these four characters we would get a perfect leader. I feel the way Shakespeare has presented the leadership of Brutus is the most significant and effective in contrast to the other leaders. I feel that Shakespeare empathizes with Brutus because he awards him a noble death. Brutus's firm optimism is both his supreme asset and his most fatal flaw. He loves Rome too much and this allows cassius to persuade him to join the conspirators, and Brutus's lack of awareness prevents him from seeing what Cassius's real motives are. 'What is it that you would impart to me? If it be aught toward the general good,' This shows that Brutus is prepared to listen to anything Cassius has to declare as long as it is for the good of Rome. ...read more.

Mark Antony unlike Brutus is also an unsympathetic character in the play. This is clearly shown when Antony says: 'These many then shall die; their names are pricked.' I feel to be sympathetic is a good quality of a leader and this characteristic makes a leader loved by their public. At the beginning of the play Antony's Character is different. Antony does not appear to be very politic instead his character is presented as a fun person who 'loves music.' He seems to be a compassionate, committed friend to Caesar but after Caesar's death he changes and appears to be malicious. He is so full of loathing that his character changes entirely and Antony becomes more controlling towards the end of the play. Antony appears callous, without feeling. He is prepared to cut the money that Caesar left for the people in his will. This is shown when he says to Lepidus: 'To cut of some charge in legacies' This proves that Mark Antony is insincere because at first he uses the will to win the crowd over and when he wins them over he does not give them the money that he promised. At this point the audience know Mark Antony's character has altered for the worse. To make unfilled promises is a bad trait of a leader because the crowd could go in opposition to Antony for doing this. Towards the end of the play Antony's character appears child like because he wants to push Lepidus out of favour, and this is shown when he describes Lepidus as a 'slight ummeritable man.' ...read more.

He does not care about the public good and is not afraid to use his friendship with Brutus to get what he wants. Mark Antony is a loyal and caring friend towards Caesar but when Caesar dies he becomes vengeful and cannot see beyond avenging Caesar's death. Caesar, Cassius and Mark Antony are all similar because they are not sympathetic characters, whereas Brutus is sympathetic. I feel all the leaders have good features but none of them are perfect as leaders. I feel that Brutus is not politically astute and due to this he makes many miscalculations. Brutus is respected in the play and has a certain position of superiority. This is what would make Brutus a good leader. Brutus is not very persuasive because he fails to appeal to the crowd. Contrasting this Mark Antony is very persuasive as he manages to win the crowd over. Caesar is the main leader in the play but he dies quite early. He reappears as a ghost. This shows that even though he is dead, he still manages to have an effect on Brutus. The fact that Octavius has the last say in the play shows that he is the next leader. I feel that the audience is sympathetic towards Brutus because of his conflicting emotions and confusion. Brutus dies nobly shows that he deserved a noble death because he wanted the best for Rome. Brutus only committed murder because he thought killing Caesar would assist Rome. I feel that Brutus would have made an excellent leader if he were politically astute. ...read more.