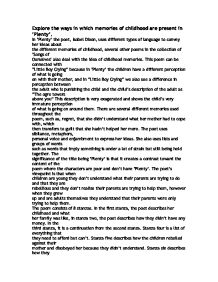 Explore the ways in which memories of childhood are present in 'Plenty'.

Explore the ways in which memories of childhood are present in 'Plenty'. In 'Plenty' the poet, Isobel Dixon, uses different types of language to convey her ideas about the different memories of childhood, several other poems in the collection of 'Songs of Ourselves' also deal with the idea of childhood memories. This poem can be connected with "Little Boy Crying" because in 'Plenty' the children have a different perception of what is going on with their mother, and in "Little Boy Crying" we also see a difference in perception between the adult who is punishing the child and the child's description of the adult as "The ogre towers above you" This description is very exagerated and shows the child's very immature perception of what is going on around them. There are several different memories used throughout the poem, such as, regret, that she didn't understand what her mother had to cope with, which then transfers to guilt that she hadn't helped her more. The poet uses sibilance, metaphors, personal voice and enjambment to express her ideas. She also uses lists and groups of words such as words that imply something is under a lot of strain but still being held together. ...read more.

'Sums and worries, shopping lists' she then uses enjambment between the two stanzas to split the list up into things she does and things she has to buy to keep her family afloat. 'For aspirin, porridge, petrol, bread. Even the toilet paper counted', they couldn't have things they wanted. It was all things they needed to live on. The children in the poem are described as if they are planning a conspiracy against the mother. The poet portrays the mother as if she is deliberately depriving the children of things they want, 'We thought her mean'. The children do as little as possible to help the mother. 'Skipped chores', 'swiped biscuits' and 'stole another precious inch'. These words give the children a carefree happy image, like they don't see what is happening around them, or they are choosing to ignore it. 'Stole' gives the representation of a child being told not to take something, but taking it anyway, just to see if they can get away with it. The children knew they weren't allowed to have anymore water but they took some anyway, forbidden fruits always taste the sweetest. ...read more.

There is a lot of regret in this as she says she leaves the heating on and then after using enjambment she says that she misses her scattered sisters, this connects the two. She wishes she could share with them all her luxuries. The sentence, 'we thought her mean' is very short, this implies a lot of regret, and it's like she's thinking out loud. 'Thought' is past tense, she can now understand what it was like for her mother and regrets not having her mother there with her to enjoy the luxuries. In the poem 'Plenty' memories of childhood are present in different forms of feelings, such as regret and guilt. The poet is successful in conveying the feelings and portraying messages through her language. The poem gives people images of what life is like for people who live in poverty. The children in the poem acted completely oblivious to the problems their mother had. It shows that children don't always want to see things. In the poem the children tried to pretend their mother was happy and they had a happy home life, although they did see her sadness sometimes in the way she acted, 'Where dams leaked dry and windmills stalled. Like mommy's smile'. ...read more.