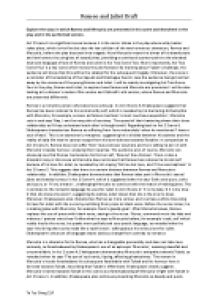 Explore the ways in which Romeo and Mercutio are presented in Act 2 Scene 4 and in elsewhere in the play and in the performed version.

﻿Romeo and Juliet Draft ________________ Explore the ways in which Romeo and Mercutio are presented in this scene and elsewhere in the play and in the performed version. Act 2 Scene 4 is a significant scene because it is the comic climax in the play where witty banter takes place, which is the first but also the last collision of the two humorous characters, Romeo and Mercutio, before the play descends into tragedy. Here Mercutio meets the climax of his bawdy style and low humour by using lots of sexual jokes, providing a continued counter-point to the elevated style and language of love of Romeo and Juliet in Act Two Scene Two. More importantly, Act Two Scene Four is a key scene which moves the plot forward. By learning about Tybalt?s challenge, the audience will know that this will be the catalyst for the subsequent tragedy. Moreover, the scene is a reminder of the backdrop of the Capulet and Montague feud in case the audience had got carried away by the romance of the young Romeo and Juliet. I will be mainly investigating Act Two Scene Four in the play, Romeo and Juliet, to explore how Romeo and Mercutio are presented. ...read more.

Contrary to what Mercutio says in Act 1 Scene 4: ?Romeo! Humours! Madman! Passion! Lover!?, which suggests that there is a certain distance between Romeo and Mercutio?s relationships as he makes fun of Romeo?s ?love melancholy? ;their friendship is at its peak in Act 2 Scene 4, as revealed by the bantering stichomythia. This is important for developing the audience?s sense of their close relationship and providing a catalyst for subsequent tragedy. In Act 2 Scene 4, Shakespeare uses Benvolio to introduce a note of caution, which is revealed when he says ?Stop there, stop there.? to warn Mercutio not to go too far with his sexual jokes. Shakespeare constructs Benvolio as a voice of caution and warning, which is also shown in Act 3 Scene 1 as he says ?If we meet we shall not scape a brawl, for now, these hot days, is the mad blood stirring.? to Mercutio, foreshadowing that Mercutio may ?go too far? and causes tragedy. In addition, Shakespeare characterises the nurse as slow-witted and easily confused by Mercutio, as evidenced by her reply to Mercutio?s mocking of her, saying ?If you be he, sir, I desire some confidence with you.? after Mercutio says?Yea, is the worst well? ...read more.

Mercutio?s comedy scenes, especially Act 2 Scene 4 where he meets his comic climax, evolve intense pathos for his death in Act 3 Scene 1 as well. Therefore, their friendship is very important to the whole play. Overall, although there are a few adjustments in both Luhrmann and Zeffirelli performed versions, Romeo is mainly presented as a romantic and serious person, juxtaposing with Mercutio, who is changeable, mocking and not serious about love. Their close friendship is suggested in both film versions. The only key difference is the character of the Nurse, who is presented as high-status in Luhrmann version but low-status and slow-witted in Zeffirelli version. As a whole, it is obvious that Act 2 Scene 4 is presented similarly in Shakespeare?s version and both performed versions because this scene is very important to the play. The close relationship between Romeo and Mercutio is required as a catalyst for the subsequent tragedy. Also, Act 2 Scene 4 is the last scene of comedy before the play descends into the tragedy. More importantly, a comedy scene is needed as a contrast with the romance scene when Romeo discusses with the Nurse about the marriage with Juliet, which highlights the seriousness of Romeo?s love to Juliet in Act 2 Scene 4: ?Commend me to thy lady and mistress. I protest unto thee-? To Tsz Ching 11P ...read more.