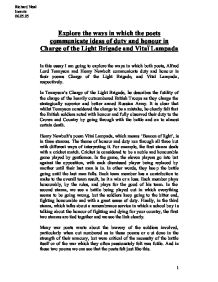 Explore the ways in which the poets communicate ideas of duty and honour in Charge of the Light Brigade and Vita� Lampada In this essay I am going to explore the ways in which both poets, Alfred Lord Tennyson and Henry Newbolt communicate duty and honour in their poems Charge of the Light Brigade, and Vita� Lampada, respectively. In Tennyson's Charge of the Light Brigade, he describes the futility of the charge of the heavily outnumbered British Troops as they charge the strategically superior and better armed Russian Army. It is clear that whilst Tennyson considered the charge to be a mistake, he clearly felt that the British soldiers acted with honour and fully observed their duty to the Crown and Country by going through with the battle and on to almost certain death. Henry Newbolt's poem Vitai Lampada, which means 'Beacon of light', is in three stanzas. The theme of honour and duty run through all three but with different ways of interpreting it. For example, the first stanza deals with a cricket match. ...read more.

right at the British troops from all sides of the valley: 'Cannon to the right of them, Cannon to the left of them, Cannon in front of them.' Both poets communicate vividly the feelings of the soldiers involved in these poems and the state of the battles. For example, in Charge of the light Brigade Alfred Lord Tennyson says, 'Rode the six hundred', 'into the mouth of Hell', 'into the jaws of Death', conveying constant movement of the British Troops against all the odds, into a battle from which they would almost certainly die. Alfred Lord Tennyson is constantly talking about the fact that the British troops were extremely outnumbered against the Russian army, and that the Russians had cannons and rifles and all the British army had was a brigade of cavalry with swords; this was bad as they had to get in close to the Russians to actually start killing them. But despite this, they carried on: "When can their glory fade? O the wild charge they made!" Alfred Lord Tennyson uses a lot of imagery to communicate honour and duty I think; because when he says, 'Shattered and sundered' this could mean a few things, one it could mean that 'Shattered' could have been the bones of the British. ...read more.

The imagery plays an important part in the communication of ideas of duty and honour in both Charge of the Light Brigade and Vita� Lampada. The poet of Vita� Lampada, Henry Newbolt, communicates ideas of duty and honour, by saying that in all three of the stanzas in the poem; stanza one is about a cricket match and that one man can change the outcome of everything. "Ten to make and the match to win - A bumping pitch and a blinding light" Stanza two is about war or a battle in a war, and that they are being killed all of their weapons are jammed, their Colonel is dead, and they have lost. "The sand of the desert is sodden red, - Red with the wreck of a square that broke; - The Gatling's jammed and the Colonel dead," Stanza three is about a remembrance service, and ties both the first and the second stanzas together, the words of a schoolboy are the focus in this stanza and poem, because the he talks about that dying for your country is a great thing and which should be honoured. "And falling fling to the host behind - 'Play up! Play up! And play the game!'" 1 ...read more.