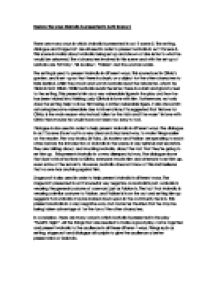 Explore the ways Malvolio is presented in Act2 Scene 5

Explore the ways Malvolio is presented in Act2 Scene 5 There are many ways in which Malvolio is presented in act 2 scene 5. The setting, dialogue and Stagecraft are all used in order to present Malvolio in Act 2 Scene 5. This scene is mainly about Malvolio being set up and shown a fake letter to what he would be ashamed. The 4 characters involved in this scene and with the set up of Malvolio are 'Sir Toby', 'Sir Andrew', 'Fabian' and the woman Maria. The setting is used to present Malvolio in different ways. This scene is set in Olivia's garden, and is set up so that there is a bush, or a object for the other characters to hide behind, whilst they mock and watch Malvolio read the fake letter, whom he thinks is from Olivia. ...read more.

It is suggested that his love for Olivia, is the main reason why he had fallen for the trick and if he wasn't in love with Olivia then maybe he would have not been too easy to fool. Dialogue is also used in order to help present Malvolio in different ways. The dialogue in act 2 scene 5 is set out in a very clear and structured way, to make things easier on the reader. The way Maria, Sir Toby, Sir Andrew and Fabian are speaking to each other, before the introduction of Malvolio in the scene, is very spiteful and secretive. They are talking about, and mocking Malvolio, about the fact that they're going to set him up. ...read more.

Malvolio is wearing the general costume of a servant, just as Fabian is. The fact that Malvolio is wearing a similar costume to Fabian, and Fabian is in on the act and setting him up suggests that Malvolio may be looked down upon in the community he is in. This presents Malvolio in a very negative way and connotes the idea that he may be being taken advantage of for the fun of the other characters. In conclusion, there are many ways in which Malvolio is presented in the play "Twelfth Night". All the things that are needed to make a good play, come together and present Malvolio to the audience in all these different ways. Things such as setting, stagecraft and dialogue all conjoin to give the audience a better presentation of Malvolio. ...read more.