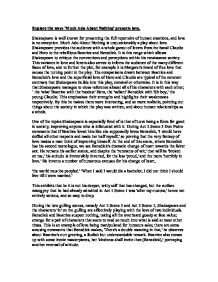 Explore the ways 'Much Ado About Nothing' presents love.

Explore the ways 'Much Ado About Nothing' presents love. Shakespeare is well known for presenting the full repertoire of human emotions, and love is no exception. Much Ado About Nothing is unquestionably a play about love. Shakespeare provides the audience with a whole gamut of lovers from the banal Claudio and Hero to the rebellious Beatrice and Benedick. It is this range which allows Shakespeare to critique the conventions and perceptions within his renaissance society This variance in love and lovers also serves to inform the audience of the many different faces of love, and to further the plot, for example it is Margaret's brand of free love that causes the turning point in the play. The comparisons drawn between Beatrice and Benedick's love and the superficial love of Hero and Claudio are typical of the constant contrasts that Shakespeare builds into this play, comical or otherwise. It is in this way that Shakespeare manages to cross-reference almost all of his characters with each other; ` the 'wise' Beatrice with the 'modest' Hero, the 'valiant' Benedick with 'Sir boy,' the young Claudio. This emphasises their strengths and highlights their weaknesses respectively. By this he makes them more interesting, and so more realistic, pointing out things about the society in which the play was written, and about human relationships as a whole. One of the topics Shakespeare is especially fond of is that of Love being a force for good in society, improving anyone who is infatuated with it. During Act 2 Scene 3 Don Pedro comments that if Beatrice loved him like she supposedly loves Benedick, 'I would have doffed all other respects and made her half myself,' so proving that the very fantasy of love makes a man think of improving himself. ...read more.

He is, in this scene, making a mockery of love and the main constituent of true love, namely trust. Again conversely, Benedick and Beatrice's love stands up better than ever, but, Benedick does encounter a challenge to this love, to requite it he must not only turn his back on his much trumpeted male bonds of earlier in the play, but challenge one of those who he said he 'loved,' thanks to Beatrice's wish to 'kill Claudio.' Despite this each of them professes their love 'with all thy heart,' and although a tragedy has come to pass, their wit stays as fine-tuned as it ever was. This proves conclusively that this is a love built to last, built, it is suggested, on foundations of an old love, the stability coming from that, but the passion renewed. Another of Shakespeare's themes is that of order, and the relationship of love and marriage to it. In Shakespeare's time marriage was almost exclusively not an expression of love between two people, as it is today, but a financial transaction between the brides father and the groom, money for the groom, prestige for the father. This is what happens, almost exactly in the marriage between Claudio and Hero. Shakespeare is attempting to get across to the audience the impersonality of this kind of marriage, by the shallowness and idealism of Claudio's image of Hero, and by the very limited communication between them. This however, is disguised by the underlying theme of the play, which suggests that marriage brings order. Beatrice, who represents a 'strong' woman, and so disorder in Shakespearean terms is 'tamed' in the last scene of the play by Benedick with an ironic kiss, saying 'peace, I will stop your mouth,' thus 'stopping' the only means of rebellion that Beatrice has. ...read more.

The very fact that there is not full resolution at the end draws our attention to the details of why that fact is so, this being impossible in a tragedy, for there is no resolution The overall message of the play I feel is subversive in terms of love, despite a number of clues showing otherwise. At the time the play was written, as has been said, marriage was primarily a transaction, almost never for love. Of the two marriages it is obvious which one will be successful and which one will almost certainly fail. Claudio and Hero's marriage was arranged between Don Pedro and Leonato, so defiantly falling into the transaction marriage category, whereas Benedick and Beatrices' was not arranged at all. The message that this conveys to the audience is very subversive for the time; that marriage should be for love and not for money. This message is however fairly well disguised, so to the casual eye the play seems conventional, with the marriage of Claudio and Hero signifying closure and restoring order, which demonstrates that not only is their relationship superficial, but also their presentation within the play. Much Ado About Nothing explores the many nooks and crannies that lurk in the dark theoretical world of love. Shakespeare captures the essence of love, in his language, structure and content. The presentation of love in this play is wide both in scope and in application, including many relevant ideas. The structure of the play helps convey these, and still maintains it as a comedy. There is a sinister, evil tainted scene, followed by a comic one, balancing the play, but still including all the negative points that Shakespeare wants to convey. It is altogether a hugely impressive piece of playwriting, and Shakespeare deserves the adulation he duly receives. ...read more.