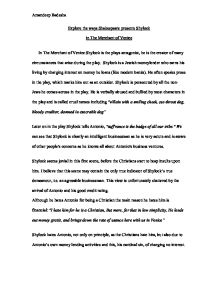 Explore the ways Shakespeare presents Shylock in The Merchant of Venice.

Explore the ways Shakespeare presents Shylock in The Merchant of Venice In The Merchant of Venice Shylock is the plays antagonist, he is the creator of many circumstances that arise during the play. Shylock is a Jewish moneylender who earns his living by charging interest on money he loans (like modern banks). He often speaks prose in the play, which marks him out as an outsider. Shylock is persecuted by all the non-Jews he comes across in the play. He is verbally abused and bullied by most characters in the play and is called cruel names including "villain with a smiling cheek, cut-throat dog, bloody creditor, damned in execrable dog" Later on in the play Shylock tells Antonio, "suff'rance is the badge of all our tribe." We can see that Shylock is clearly an intelligent businessman as he is very astute and is aware of other people's concerns as he knows all about Antonio's business ventures. Shylock seems jovial in this first scene, before the Christians start to heap insults upon him. I believe that this scene may contain the only true indicator of Shylock's true demeanour, i.e. an agreeable businessman. This view is unfortunately shattered by the arrival of Antonio and his good credit rating. ...read more.

Would she were hears'd at my foot and the ducats in her coffin!" (III,i,88-90). The fact that Shylock wish's for his daughter to be dead, certainly withdraws a great deal of the sympathy that was created by the previous plea for the acknowledgment of his humanity. During the period of this outbreak, Shakespeare again portrays an image of an evil, murderous Jew who is willing to kill his own daughter for the sake of a few 'ducats'. Shylock seeks revenge against his enemies/betrayers, but it is also he who suffers the penalty after the Christians join to trick him. Possibly Shylock may have had more victory if he had worked at justice instead of revenge or perhaps it is the loss of Jessica as well as all the harsh treatment he has suffered from Antonio and others over the years that makes him bitter enough to ask for Antonio's pound of flesh. Christians alienate Shylock Christians alienate Shylock simply because he is a Jew. In ancient, medieval, and Renaissance times, Jews almost always encountered prejudice from non-Jews around them. Scholars are divided on whether Shakespeare, in The Merchant of Venice, was attempting condemn anti-Semitism by sympathizing with Shylock or approve of anti-Semitism by ridiculing Shylock. ...read more.

On the whole I feel that this point about the humanity of Shylock being portrayed in the play is a good one. Evidently, this crucial piece of speech that Shakespeare has added creates a level of compassion in the audience for Shylock. However, I don't feel that one short speech of eleven lines overshadows the far more dominate themes of Shylock's characterization in the play. Shylock is one of the most confusing characters in all Shakespeare plays. Playing the character of Shylock would be quite difficult as he is a very confusing character. One would not know how to act out his character due to the different angles at which Shakespeare has presented his character. I personally feel Shakespeare takes this stereotypical view of Shylock; further then necessary. Hence presenting Shylock as a very complicated character to play. In conclusion, I think Shylock is the villain in this play. The way in which Shakespeare presents this is how Shylock treats those he is closer with, for instance his relationship with his daughter Jessica corresponds to his evil character. Due to Shylock's lack of benevolence towards Antonio, both audience and reader automatically classify Shylock as the bad character. Shylock's need for revenge takes over all other parts of his life. Only Shakespeare really knows what he wanted the character 'Shylock' to be portrayed as. Amandeep Badesha ...read more.