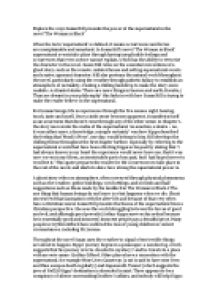 ï»¿Explore the ways Susan Hill presents the power of the supernatural in the novel ‘The Woman in Black’ When the term ‘supernatural’ is defined, it means occurrences and forms are unexplainable and unnatural. In Susan Hill’s novel ‘The Woman in Black’ supernatural events take place through having inexplicable feelings and occurrences that even science cannot explain, which has the ability to terrorise the character in the novel. Susan Hill relies on the essential conventions of a ghost story; such as the remote, isolated house and setting supernatural events and a naïve, ignorant character. Hill also portrays the natural world throughout the novel, particularly using the weather through pathetic fallacy to establish an atmosphere of normality, creating a chilling backdrop to make the story seem realistic. As Hamlet states ‘There are more things in heaven and earth, Horatio,/ Than are dreamt in your philosophy’ this links in with how Susan Hill is trying to make the reader believe in the supernatural. ...read more.

She sees the world struggling between the forces of good and evil, and although good prevails (Arthur Kipps survives his ordeal because he is essentially good and innocent) innocent people pay a dreadful price. Many people in Crythin Gifford have suffered the loss of young children in violent circumstances, including Mr Jerome. Throughout the novel Susan uses the weather to signal when terrible things are about to happen. Kipps? journey begins in a peasouper, a London fog, which suggests that his journey is to be clouded in mystery,7 and he travels to a place with an eerie name: Crythin Gifford. Other places have a connection with the supernatural, for example Nine Lives Causeway (a cat is said to have nine lives and thus escapes death regularly) and Gapemouth Tunnel (which suggests the jaws of Hell).8 Kipps? destination is shrouded in mist. There appears to be a conspiracy of silence surrounding Drablow?s affairs, and nobody will help Kipps ? all he receives is warnings and evasions. ...read more.

You may doubt it? We know.? The climax of Arthur Kipps? story is when Kipps? young son is catapulted from a pony trap and dies instantly as he hits a tree when the ghost steps out in front of the horse. Kipps is forced to witness this event as Jennet Humfrye was compelled to witness the drowning of her young son in the marshes off the Nine Lives Causeway. In this way, Hill presents the supernatural through careful manipulation of plot and structure as these two events are like a mirror image of each other. This provides symmetry to the structure. In comparison to other novels, The Woman in Black is relatively short. Susan Hill?s strength as writer is in creating atmosphere where the reader is seduced into a terrifying supernatural experience. The structure of the novel is carefully crafted to this end, the effects are created through skilful use of language and there is no unnecessary development of the minor characters, as this would detract from her purpose to thrill, chill and terrify. ...read more.