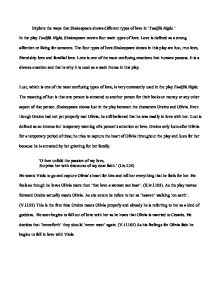 Explore the ways that Shakespeare shows different types of love in Twelfth Night.(TM)

Explore the ways that Shakespeare shows different types of love in 'Twelfth Night.' In the play Twelfth Night, Shakespeare covers four main types of love. Love is defined as a strong affection or liking for someone. The four types of love Shakespeare shows in this play are lust, true love, friendship love and familial love. Love is one of the most confusing emotions that humans possess. It is a diverse emotion and that is why it is used as a main theme in this play. Lust, which is one of the most confusing types of love, is very commonly used in the play Twelfth Night. The meaning of lust is that one person is attracted to another person for their looks or money or any other aspect of that person. Shakespeare shows lust in the play between the characters Orsino and Olivia. Even though Orsino had not yet properly met Olivia, he still believed that he was madly in love with her. Lust is defined as an intense but temporary wanting of a person's attention or love. Orsino only lusts after Olivia for a temporary period of time; he tries to capture the heart of Olivia throughout the play and lusts for her because he is attracted by her grieving for her family. ...read more.

Viola hints at her feelings for Orsino throughout the play. 'A blank, my lord. She never told her love, But let concealment, like a worm I' th' bud, Feed on her damask cheek. She pin'd in thought' (II.iv.l.112) This speech is very ironic as Orsino does not realise here that Viola is actually talking about her own feelings for him. Shakespeare uses the metaphor 'like a worm I'th' bud' to show how Viola feels. It explains that concealing her feelings is destroying her like a bud that destroys a rose. Although it is destroying her she mentions that she is still 'smiling at grief' (II.iv.l.116) because she loves truly and deeply and is willing to sacrifice herself for love. Orsino carried on speaking of his love for Olivia making Viola want to tell Orsino that she herself is in love with him. In the final scene Viola reveals herself as a woman. Orsino tells Viola that from now on she shall be her 'master's mistress.' (V.i.l.319) As she was disguised as a man, Viola and Orsino had a very good friendship, which meant the switch to husband and wife was made very easy. ...read more.

This is demonstrated by Viola over the death of her twin brother. She truly mourns the death of Sebastian, and takes on his appearance not only to help her survive in this foreign land, but also so that she may keep some aspect of her brother close to her. Viola's love for Sebastian is shown mainly at the beginning of the play, in Act I Scene ii. Her first thoughts after the shipwreck are of her brother. She refuses to believe that he is 'drown'd' (I.ii.l.5). Familial love is also shown through the character of Olivia as she mourns for her brother. She makes a declaration of her lost brothers' death by saying she will have no visitors, she turns people away claiming that it is for her 'brother's death' (I.v.l.65) that she wants no visitors. She refuses to think about the idea of love and marriage as she loved her brother very much and all her emotion is going to her brother. Love plays a major role in Twelfth Night, and Shakespeare addresses the ideas of lust, true love, friendship love and familial love in very clever and interesting way. In this play Shakespeare shows love as more then just love shared between two people romantically, but also shows it as the love between friends and family. ...read more.