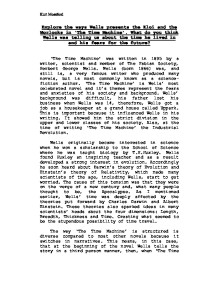 Explore the ways Wells presents the Eloi and the Morlocks in 'The Time Machine'. What do you think Wells was telling us about the time he lived in and his fears for the future?

Explore the ways Wells presents the Eloi and the Morlocks in 'The Time Machine'. What do you think Wells was telling us about the time he lived in and his fears for the future? 'The Time Machine' was written in 1895 by a writer, scientist and member of The Fabian Society, Herbert George Wells. Wells (born 1866) was, and still is, a very famous writer who produced many novels, but is most commonly known as a science-fiction author. 'The Time Machine' is Wells' most celebrated novel and it's themes represent the fears and anxieties of his society and background. Wells' background was difficult, his father lost his business when Wells was 14, therefore, Wells got a job as a housekeeper at a grand house called Uppark. This is important because it influenced Wells in his writing. It showed him the strict division in the upper and lower classes of his society. Also, at the time of writing 'The Time Machine' the Industrial Revolution. ...read more.

'The Time Machine' has many characters but none so profound as 'The Time Traveller'. 'The Time Traveller' is a smart, intellectual upper-class man of his time, with smart friends as well. He's also an amazingly bright scientist, which is what pushed him further to make his time machine. The world to which the 'Time Traveller' visits in his long journey through time is described as a 'Dystopia'. A 'Dystopia' is best defined as the complete opposite of a 'Utopia'. A 'Utopia' is a dream or fantasy world that is completely perfect, therefore, a 'Dystopia' is a nightmare world with horrible secrets. The 'Eloi' race are a pleasant but slightly frivolous. The name tells us that they are not a violent race because it does have a sharp, brisk tone. The 'Eloi' represent a strange but cheerful people who have no advantage over the 'Morlocks'. The appearance of the 'Eloi' is somewhat frail and weak. The 'Time Traveller' describes them as "exquisite creatures" and "fragile things out of futurity". ...read more.

The relationship between the 'Eloi' and the 'Morlocks' is a bizarre but well-planned liaison. The 'Eloi' eat the food on the plants, which is nurtured for by the 'Morlocks', who eat the 'Eloi' (cannibalism). Wells has an unmatchable aptitude to create a sense of horror in the readers' minds, somehow, he taps into it and generates an unbelievable sensation of terror and unforgivness to enchant the reader on the book and nothing else. The 'Eloi' and the 'Morlocks' liaison reflects the class system of Wells' time because it shows us the 'Eloi' as the upper-class people going round at day above ground. While the lower-class people ('Morlocks') go around by night using tunnels below ground to manoeuvre about the land. All in all Wells was trying to warn us that the apocalypse or end of the world as we know it was near and to prepare for the possible degeneration of the human race. Therefore, my conclusion is Wells was a very smart man, but evidently, his prediction was wrong, at least at the time he predicted it. ?? ?? ?? ?? Kurt Mossford ...read more.