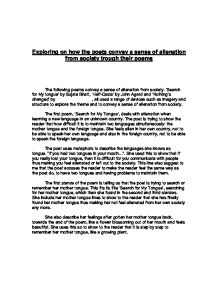 Exploring how the poets convey a sense of alienation from society trough their poems.

Exploring on how the poets convey a sense of alienation from society trough their poems The following poems convey a sense of alienation from society. 'Search for My tongue' by Sujata Bhatt, 'Half-Caste' by John Agard and 'Nothing's changed' by , all used a range of devices such as imagery and structure to explore the theme and to convey a sense of alienation from society. The first poem, 'Search for My Tongue', deals with alienation when learning a new language in an unknown country. The poet is trying to show the reader that how difficult it is to maintain two languages simultaneously: the mother tongue and the foreign tongue. She feels alien in her own country, not to be able to speak her own language and also in the foreign country, not to be able to speak the foreign language. The poet uses metaphors to describe the languages she knows as tongue. "If you had two tongues in your mouth...". She used this to show that if you really lost your tongue, then it is difficult for you communicate with people thus making you feel alienated or left out to the society. ...read more.

The poet chooses Picasso because he is one of the greatest painters in the world and no matter which colour Picasso choose the end results will be beautiful. The poet uses also the repetition of "wha yu mean when yu say half-caste" in his poem to indicate that he does not believe that people should be labelled as a Half-Caste and he also want to show his anger about calling people Half-Caste. When he said "an mix a black key wid a white key is a half-caste symphony", he is referring to if black people mixed with white people they would make a loving and beautiful society. Towards the end of the poem, the poet is trying to tell the person who is saying he is a Half-Caste to realise that no matter what you are you should not be labelled and that you should feel the same as other people and not feeling separated. He uses humour dialect to tell to the person that he would not be a friend with the person who does not think highly of himself. ...read more.

The flowers seem to be welcoming him back. The poet is trying to show how the environment varies between the black and the white territories, from harsh and hostile surroundings to friendly and happy surroundings. As he reaches the white territories, the District Six, he knows that he does not belong there. "Whites only inn. No sign says it is: but we know where we belong". The poet use a pun "whites only inn", to show to the reader that black people does not belong there and to show that the place is belong to the white people. At the end of the poem he contrasted the difference between the white people restaurants and the black people food stall. He noticed that the restaurant is fancy and have nice foods served there while the food stall is just plain, dull and simple food is served there. After looking at the three poems, I found that the poets use similar ways to convey the sense of alienation. They uses metaphors to clearly describe to the reader the sense of alienation. ...read more.