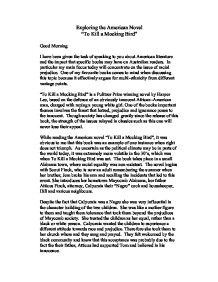 Exploring the American Novel "To Kill a Mocking Bird" Good Morning I have been given the task of speaking to you about American literature and the impact that specific books may have on Australian readers. In particular my main focus today will concentrate on the issue of racial prejudice. One of my favourite books comes to mind when discussing this topic because it effectively argues for multi-ethnicity from different vantage points. "To Kill a Mocking Bird" is a Pulitzer Prize winning novel by Harper Lee, based on the defence of an obviously innocent African-American man, charged with raping a young white girl. One of the books important themes involves the threat that hatred, prejudice and ignorance poses to the innocent. Though society has changed greatly since the release of this book, the strength of the issues relayed in classics such as this one will never lose their appeal. ...read more.

She was like a mother figure to them and taught them tolerance that took them beyond the prejudices of Maycomb society. She treated the children as her equal, rather than a black or white person. Calpurnia wanted the children to experience a different attitude towards race and prejudice. Therefore she took them to her church where and they sang and prayed. They felt welcomed by the black community and knew that this acceptance was probably due to the fact the their father, Atticus had supported Tom and believed in his innocence. While there are plenty of civil rights injustices to be found in the news headlines today, our attitude towards race relations has changed dramatically. The book however, reveals that to live in the 1930's and be black meant living a life as an inferior being. ...read more.

One particular paragraph explains his response to racial prejudice - it says "But let me tell you something and don't you forget it. As you grow older you'll see white men cheat black men every day of your life - whenever a white man does that to a black man, no matter who he is, how rich he is, or how fine a family he comes from, that white man is trash". This statement is a clear message to not only Americans or Australians, but all mankind, to treat human beings equally no matter what there colour or race. It appears that the moral voice of To Kill a Mocking Bird is embodied by Atticus Finch, who understands that, rather than being simply creatures of good or evil, most people have both good and bad qualities. What this piece of literature has taught society is to appreciate the good qualities and understand the bad qualities of people by treating others with sympathy and trying to learn life from there perspective. ...read more.