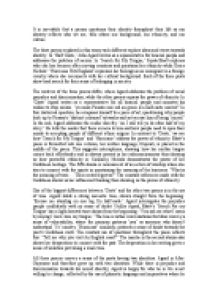 Exploring the theme of identity in three poems from different cultures by Agard, Bhatt, and Nichols.

Transfer-Encoding: chunked ﻿It is inevitable that a person questions their identity throughout their life as our identity reflects who we are, tells others our background, our ethnicity, and our culture. The three poems explored in this essay each different explore ideas and views towards identity. In ?Half Caste,? John Agard writes as a representative for biracial people and addresses the problem of racism. In ?Search for My Tongue,? Sujata Bhatt explores who she has become after moving countries and questions her ethnicity while Grace Nichols? ?Hurricane Hits England? expresses her feelings as an immigrant in a foreign country where she reconnects with her cultural background. Each of the three poets show hard search for their sense of belonging in society. The motives of the three poems differ, where Agard addresses the problem of racial prejudice and discrimination, while the other poems express the power of ethnicity. In ?Caste? Agard writes as a representative for all biracial people and connotes his wishes to stop racism: ?yu mean Picasso mix red an green is a half-caste canvas?? In this rhetorical question, he compares himself to a piece of art, questioning why ...read more.

One of the biggest differences between ?Caste? and the other two poems is in the use of tone. Agard holds a strong sarcastic tone, shown straight from the beginning: ?Excuse me standing on one leg I'm half-caste.? Agard interrogates the prejudice people confidently with no sense of doubt. Unlike Agard, Bhatt?s ?Search For my Tongue' has a light-hearted tone shown from the beginning: ?You ask me what I mean by saying I have lose my tongue.? The line is rather conversational but does convey a sense of vulnerability, where the pronoun portrays ?you? as someone who doesn?t understand ?I?s? anxiety. ?Hurricane? similarly, presents a sense of doubt towards the poet?s Caribbean roots. The constant use of questions throughout the poem reflects this: ?Tell me why you visit An English coast?? The mantra in the second stanza also shows her desperation to connect with the past. The desperation in her writing gives a sense of isolation provoking a weak tone. All three poems convey a sense of the poets having two identities. ...read more.

However, we see that she grows stronger and becomes more confident towards the end: ?Every time I think I've forgotten, I think I've lost the mother tongue, it blossoms out of my mouth.? The end of the poem connotes an energetic tone depicted by the word ?blossom' symbolising rising power and beauty. The metaphor of a plant portrays the mother language as the ?roots? of her identity. Bhatt understands who she is and accepts it. In ?Hurricane,? Nichols talks about her life as Caribbean woman who is also an immigrant in England. She conveys a sense of split identity. Like Bhatt, she is not confident but is then reassured by the storm in the end ?That the earth is the earth is the earth.? Her split identity becomes shared. She understands that it?s all the same wherever she is. Her past and present identities have merged and become one. Ultimately, we can see how the three poems address different views towards the idea of identity. Undoubtedly, Agard, Bhatt, and Nichols had overcome many hardships in exploring for their place in society. The three poets hold unique and different views, but they all show the immense power identity holds and emphasise its importance. ...read more.