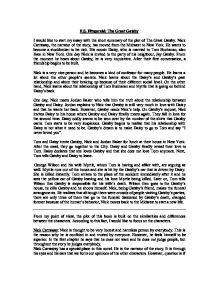 F.S. Fitzgerald: The Great Gatsby I would like to start my essay with the short summary of the plot of The Great Gatsby. Nick Carraway, the narrator of the story, has moved from the Midwest to New York. He wants to become a stockbroker to be rich. His cousin Daisy, who is married to Tom Buchanan, also lives in New York. One day Nick is invited to the party of his neighbour, Jay Gatsby. From the moment he hears about Gatsby, he is very inquisitive. After their first conversation, a friendship begins to be built. Nick is a very nice person and he becomes a kind of confessor for many people. He learns a lot about the other people's secrets. Nick learns about the Daisy's and Gatsby's past relationship and about their braking up because of their different social level. On the other hand, Nick learns about the relationship of Tom Buchanan and Myrtle that is going on behind Daisy's back. One day, Nick meets Jordan Baker who tells him the truth about the relationship between Gatsby and Daisy. Jordan explains to Nick that Gatsby is still very much in love with Daisy and that he wants her back. ...read more.

Nick admires his optimism. He likes his capacity of dream and ability to live as if the dream should come true. Jay Gatsby: He is the protagonist of the novel. Gatsby is a very determined character. He feels such a strong love to Daisy! When he finds out that Daisy is married to someone else, his efforts to win her back become very strong. This is what gives him the motivation to earn all his money and he finds the easiest and the quickest way, although it is illegal. Gatsby decides to devote his whole life to achieving the material goods with which he wants to satisfy Daisy. He lives in the past, in the moment of the absolute happiness. F.S.Fitzgerald published this book in1925 and he used the actual time in it - the Roaring Twenties. It helps to create Gatsby's character. Gatsby's participation in the bootlegging business, the extravagant parties he throws, and the careless lifestyle of the Buchanans, this all helps to create the characters. Not only Jay Gatsby. Gatsby's sense of what is true and real is of entirely other order than Nick's. If he were motivated by truth, Gatsby would still be poor Jay Gatz with a hopeless dream. ...read more.

This book also shows us how people can be disloyal. It shows us how they can take advantage of someone just only because he or she (Gatsby in this case) is rich. It shows us how they can forget about everything by the moment when the person is no more interesting for them. On the other hand, Gatsby's character is not only positive. What was his reason for inviting so many unknown people to his parties? A friendship? Of course not! Gatsby hoped to see Daisy there. He hoped to meet her there by chance. The visitors of the parties pretended to be friends of Gatsby as well as he pretended the same. And in the moment of his death, there was no need to pretend anymore. The real human nature started to be seen. I would like to finish with the question. Is Gatsby great? It is not easy to find the answer. In some ways he is. You must admire a man who lives his whole life devoting it to his passion. However, some things in his life are foolish. Did Gatsby like his life? Was he happy when doing everything just because of Daisy? From my point of view, these things are not the aspects that make our lives fulfilled. ...read more.