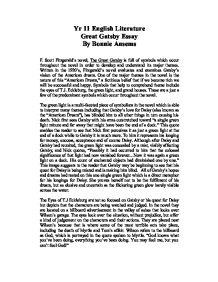 F. Scott Fitzgerald's novel, The Great Gatsby is full of symbols which occur throughout the novel in order to develop and understand its major themes.

Yr 11 English Literature Great Gatsby Essay By Bonnie Ansems F. Scott Fitzgerald's novel, The Great Gatsby is full of symbols which occur throughout the novel in order to develop and understand its major themes. Written in the 1920's, Fitzgerald's novel evaluates and examines Gatsby's vision of the American dream. One of the major themes in the novel is the nature of this "American Dream," a fictitious belief that if we become rich we will be successful and happy. Symbols that help to comprehend theme include the eyes of T.J. Eckleburg, the green light, and grand houses. These are a just a few of the predominant symbols which occur throughout the novel. The green light is a multi-faceted piece of symbolism in the novel which is able to interpret many themes including that Gatsby's love for Daisy (also known as the "American Dream"), has blinded him to all other things in turn causing his death. Nick first sees Gatsby with his arms outstretched toward "a single green light minute and far away that might have been the end of a dock." ...read more.

The Eyes of T.J Eckleburg are not so focused on Gatsby or his quest for Daisy but depicts that the characters are being watched and judged. In the novel they are located on a billboard advertisement in the valley of ashes that looks over Wilson's garage. The eyes look over the situation, without prejudice, but offer a kind of judgement on the characters and their actions. They are placed near Wilson's because that is where some of the most terrible acts take place, including the death of Myrtle and Tom's affair. Wilson refers to the billboard as God, which is portrayed in the quote spoken to Myrtle. "God knows what you've been doing, everything you've been doing. You may fool me, but you can't fool God!" The major theme that arises from the symbol of the eyes of T.J Eckleburg is that the characters seem to have no fear of consequence or judgement from the egocentric acts that take place. All of these crimes go unpunished, so the eyes look on and remind the characters of the guilt that they forgot to have when their crimes took place. ...read more.

The 1920's novel The Great Gatsby is one of the all time 'classic' American novels. While The Great Gatsby is representative of a particular time which seems long ago, it is by no means an "historical novel" as many of its issues or themes are still relevant in today's society. Themes such as these may include 'love can make you blind', 'money has a corruptive effect' and 'people don't fear the consequences of their actions.' The reader is able to perceive these themes through the use of meaningful symbols such as the green light, the eyes of TJ Eckleburg and grand houses. These symbols and themes all relate in some way to the main topic of the novel 'The American Dream.' Many of the characters are disillusioned with the 'American Dream' as their dreams are often fantasies, founded on romantic or materialistic ideals. These ideals are easily crushed by the harsh realities that often blind them even though they are reminded about the consequences. Gatsby's one main hope for the future was actually just part of an unattainable past. ...read more.