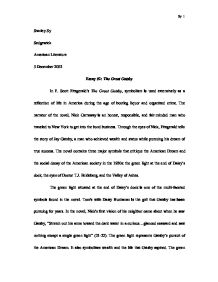 Stanley Sy Sedgewick American Literature 3 December 2002 Essay #2: The Great Gatsby In F. Scott Fitzgerald's The Great Gatsby, symbolism is used extensively as a reflection of life in America during the age of bootleg liquor and organized crime. The narrator of the novel, Nick Carraway is an honest, responsible, and fair-minded man who traveled to New York to get into the bond business. Through the eyes of Nick, Fitzgerald tells the story of Jay Gatsby, a man who achieved wealth and status while pursuing his dream of true success. The novel contains three major symbols that critique the American Dream and the social decay of the American society in the 1920s: the green light at the end of Daisy's dock, the eyes of Doctor T.J. Eckleberg, and the Valley of Ashes. The green light situated at the end of Daisy's dock is one of the multi-faceted symbols found in the novel. ...read more.

George Wilson, an unenergetic and impoverished man whose only passion is his love for his wife, refers Doctor T.J. Eckleberg's one-yard high blue eyes as those of God. George later on reveals he had taken his wife, Myrtle Wilson, a poor and voluptuous woman, who is desperate to improve her life, to the window just before she died and warned her, "God knows what you've been doing, everything you've been doing. You may fool me but you can't fool God!"(160) Fitzgerald uses the word careless frequently in describing most of characters and events in the novel. Since there seems to be no fear of consequence, Fitzgerald incorporates the eyes into the novel to symbolize a pair of omniscient and judging eyes, meant to intimidate the characters. The eyes of T.J. Eckleberg witnessed two dreadful crimes: Tom's affair with Myrtle and Myrtle's death at the hands of Daisy. All of these crimes go unpunished, as the eyes only look on and remind the characters of the guilt that they forget to have for what they have done. ...read more.

The Valley of Ashes also symbolizes the plight of the poor, like Myrtle Wilson, who live and work among the dirty ashes, which constantly reminded her of what others seem to have, that she cannot reach. This stimulates Myrtle to seek for a better life than what she has been given. Consequently, Myrtle died because of her search for the realization of the impossible of achieving the American Dream. In the novel, the Valley of Ashes, the eyes of T.J. Eckleberg, and the green light at the end of Daisy's dock, were used to evaluate the American Dream and the social decay of the American society in the 1920s. These three symbols discussed above noticeably justify the impossible to achieve the American Dream, as characters such as Gatsby and Myrtle failed to do so in the novel. It also clarifies the status of the American society during the 1920s, as a decade of social and spiritual decay, where characters such as Myrtle and Daisy, committed dreadful crimes but were unpunished. Finally, the novel reveals that the characters are willing to do whatever it takes to achieve their dream. Sy 1 ...read more.