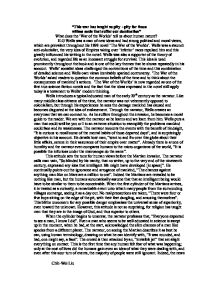 This war has taught us pity - pity for those witless souls that suffer our domination What does the War of the Worlds tell us about human nature?

"This war has taught us pity - pity for those witless souls that suffer our domination" What does the 'War of the Worlds' tell us about human nature? H.G Wells was a man of new ideas and had strong political and moral views, which are prevalent throughout his 1898 novel 'The War of the Worlds'. Wells was a staunch anti-colonialist, the very idea of Empires taking over 'inferior' races repulsed him and this greatly influenced his writing in the novel. Wells was also a supporter of the theory of evolution, and regarded life as an incessant struggle for survival. This idea is used prominently throughout the book and is one of the key themes that he shows repeatedly in his account. Wells' socialist ideas challenged the conventions of the time and this combination of detailed science and Wells own views inevitably sparked controversy. 'The War of the Worlds' asked readers to question the common beliefs of the time and to think about the consequences of mankind's actions. 'The War of the Worlds' is now regarded as one of the first true science fiction novels and the fact that the ideas expressed in the novel still apply today is a testament to Wells' modern thinking. Wells introduces a typical educated man of the early 20th century as the narrator. Like many middle class citizens of the time, the narrator was not vehemently opposed to colonialism, but through his experiences he sees the damage mankind has caused and becomes disgusted at the idea of enslavement. Through the narrator, Wells creates an everyman that we can connect to. As he suffers throughout the invasion, he becomes a moral guide to the reader. We are with the narrator as he learns and we learn from him. ...read more.

He was humbled by the Martians, but perhaps the most humbling factor of all, was that, ultimately, it was the smallest, simplest organisms that stopped the Martians. Where human technology failed, nature prevailed, showing us that no matter how advanced we become, we cannot transcend nature. In 'The War of the Worlds,' Wells explores how people react to extreme pressure. As the Martians begin their takeover, the government gives little support and even the members of the military mutiny as their innate sense of self preservation takes over. In London, as soon as the defences fall, there is mass panic, "All about him people were dressing hastily as the first breath of the coming storm of fear blew through the streets", and services begin to deteriorate quickly, "By ten o'clock the police organisation, and by midday even the railway organizations, were losing coherency, losing shape and efficiency". Evidently, it did not take the Martians much time to cause a "swift liquefaction of the social body" and this raises a question for the reader; what would happen if this situation was real? Would we cope? Wells uses this panic and disruption to demonstrate how pressure can affect us. He describes how "people were fighting savagely for standing room in the carriages," exhibiting early on the natural human survival instinct, even at the cost of others safety: "people were being trampled and crushed". Even the policemen, who are supposed to stand for strength and stability, begin "breaking the heads of the people they were called out to protect." These are signs that order truly has deteriorated, and is indicative of Wells' views on how society would react in a large scale crisis. ...read more.

The novel criticises the main aspects of society such as the army and religion, presenting them as facades, covering our darker, more primal nature. The actions of the curate and artillery-man typify the problems within these institutions and attack the inherent corruption of some of their members. Humans as a whole are humbled; they are subjugated to a position lower than another species and only then do they learn to empathise with other animals, who also suffered from the humans. However, after the defeat of the Martians, their technology opens a new horizon and Wells questions the ethical restraint of man in the face of such amazing new technology: "If the Martians can reach Venus, there is no reason to suppose we can't, and when the slow cooling of the Sun makes this planet uninhabitable, should we conquer?" Indeed, this question is still relevant. With new technologies allowing us to change genetic make-up or grow embryos, will our morality draw a line with what we can do and what we should do? Wells asks us not to judge the Martians too harshly, but to realise that they did to us what we have done to others for less justifiable reasons. So, who are we to judge them? Who are we to sit smugly and condemn the Martians for something we have also done to countless others? Ultimately, Wells shows we are all insignificant beings in a struggle to survive. Our job is not to judge, but to learn from these situations and to accept, in the same way that the narrator accepted, that nature, not man, defeated the Martians, that we are as small as the microbes in the grand scheme of things. ?? ?? ?? ?? Chih-Wei Liu ...read more.