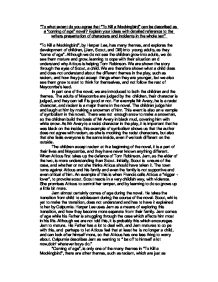 To what extent do you agree that To Kill a Mockingbird can be described as a coming of age novel? Explain your ideas with detailed reference to the writers presentation of characters and inc

“To what extent do you agree that “To Kill a Mockingbird” can be described as a “coming of age” novel? Explain your ideas with detailed reference to the writers presentation of characters and incidents in the whole text”

“To Kill a Mockingbird”, by Harper Lee, has many themes, and explores the development of children, (Jem, Scout, and Dill) into young adults, as they “come of age”. Although we do not see the children grow into adults, we do see them mature and grow, learning to cope with their situation and understand why Atticus is helping Tom Robinson. We are shown the story through the eyes of Scout, a child. We are therefore shown what a child does and does not understand about the different themes in the play, such as racism, and how they just accept things when they are younger, but we also see them grow to start to think for themselves, and not follow the rest of Maycombe’s lead.

In part one of the novel, we are introduced to both the children and the themes. The adults of Maycombe are judged by the children, their character is judged, and they can tell if is good or not. For example Mr Avery, he is a racist character, and racism is a major theme in the novel. The children judge him and laugh at him by making a snowman of him. This event is also an example of symbolism in the novel. There was not  enough snow to make a snowman, so the children build the basis of Mr Avery in black mud, covering him with white snow. As Mr Avery is a racist character in the play, it is important that he was black on the inside, this example of symbolism shows us that the author does not agree with racism, as she is mocking the racist characters, but also that she feels everyone is the same inside, even if we look different on the outside.

The children accept racism at the beginning of the novel, it is a part of their lives and Maycombe, and they have never known anything different. When Atticus first takes up the defence of Tom Robinson, Jem, as the elder of the two, is more understanding than Scout. Initially, Scout is unsure of the case, and whether or not she thinks Atticus should have taken it. The town turns against Atticus and his family and even the family is not supportive and even critical of him. An example of this is when Francis calls Atticus a “nigger-lover”, to provoke scout. Scout reacts in a very childish way, with violence. She promises Atticus to control her temper, and by learning to do so grows up a little bit more.

Jem almost certainly comes of age during the novel. He takes the transition from child to adolescent during the course of the novel. Scout, whi is yet to make the transition, does not understand and has to have it explained to her by Calpurnia. Harper Lee uses Jem as a means of exploring this transition, and how they become more separate from their family. Jem comes of age while his Father is struggling through the case which affects him most in his life. Although we are not told this, it is probably this which encourages Jem to mature. His Father has a lot to deal with, and Jem matures to cope with this, and  perhaps to let Atticus feel that at least he is no longer a child, and can look after himself more, so that Atticus has one less thing to worry about. Calpurnia describes Jem as wanting to “ be off to himself a lot now,doin’ whatever boys do.”

“Coming of age”, is only one of the many themes in “To Kill a Mockingbird”, there are other themes, such as racism, which are just as important if not more important. Examples of racism in the novel, are when Calpurnia takes the children to her church. Unlike the white peoples church the children are used to, there are no hymn books. Calpurnia also explains to them, when they ask, that it would not help at all if they had the money to get them, because only a tiny amount of people in the congregation could read. This shows racism because it shows how black people had to have separate churches, and how they could not afford much at all, and how the congregation of these churches are uneducated compared to the white church.

Other themes in the novel, are gossip, prejudice, morals, neighbourliness, and courage. Symbolism is used to show how gossip is infectious. The fire at Miss Maudie’s house could be a metaphor for how gossip spreads in the town. It also depicts gossip in a very unpleasant way, showing how it affects everyone. The fire could also show that racism is spreading in Maycombe because of the Ewells and Tom Robinsons case.

These themes show that the novel can not be taken purely as a coming of age novel, as it has much deeper meanings and morals. These themes should be just as obvious and relevant as coming of age to us today, and particularly at the time of publication. The novel is a “coming of age novel” though, although this is not its only meaning or theme. We are shown how certain situations can encourage children to mature, and how childrens understanding of events change as they grow older.