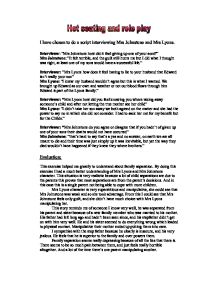 Family seperation - Hot seating and role play - I have chosen to do a script interviewing Mrs Johnstone and Mrs Lyons.

I have chosen to do a script interviewing Mrs Johnstone and Mrs Lyons. Interviewer: "Mrs Johnstone how did it feel giving up one of your sons?" Mrs Johnstone: "It felt terrible, and the guilt still hunts me but I did what I thought was right, at least one of my sons would have a successful life." Interviewer: "Mrs Lyons how does it feel having to lie to your husband that Edward isn't really your son" Mrs Lyons: "I knew my husband wouldn't agree but this is what I wanted. We brought up Edward as our own and weather or not our blood flows through him Edward is part of the Lyons family." Interviewer: "Mrs Lyons how did you feel knowing you where taking away someone's child and after not letting the true mother see her child" Mrs Lyons: "I didn't take her son away we both agreed on the matter and she had the power to say no in which she did not consider. I had to sack her not for my benefit but for the Childs." Interviewer: "Mrs Johnstone do you agree or disagree that if you hadn't of given up one of your sons their deaths would not have occurred" Mrs Johnstone: "that's hard to say that's a yes and no answer, on earth we are all meant to die and their time was just simply up it was inevitable, but yet the way they died wouldn't have happened if they knew they where brothers." ...read more.

The problem of staging various locations: Me and my group acted out pg 47 which showed different locations. Mrs Johnstone begins with talking about children including her son she is narrating this. And then once she has finished the scene cuts and goes straight into Mrs Lyons teaching Edward to dance. Because these scenes where so close together as a group we decided that for this to be effective we would have the whole scene with a blackout with only a spotlight on Mrs Johnstone and Mickey first. Then After Mrs Johnstone and Mickey finish talking we would immediately change the spotlight to Mrs Lyons and Edward. By doing this make the scene a lot more effective than having to walk on and off stage moving props ect. The three scenes we chose where: * In the hospital Where Mrs Johnstone has just had the two boys and Mrs Lyons takes one of them. * When Mickey is arrested * Mickey is told by Mrs Lyons about Linda and Edward. These scenes are essential because if these scenes didn't occur then the whole plot would never have happened. These scenes affect the main characters and are what the novel is about. The First scene: The scene begins with Mrs Johnstone holding her new born children, talking to a nurse that comes in this builds up. ...read more.

And a lot of the time the crime would be committed where there was a store of money. If I was the mother of my child who had committed a crime I would be irritated, and express myself through my tone I would do a lot of shouting too. I would feel that it was my fault in the way I had brought up my child. Mickey should be very nervous and walk around a lot, he should speak quickly and be very helpless and his voice should be slurred. I think blood brothers is a tragic comedy according to the definitions. I feel that it is a tragic comedy because both aspects exist. There's a lot of comedy in the play like when the class room scene happens. Edward is very superior and the way he back chats the teacher is shocking yet amusing. Even though in Mickey's scene there lower class they still didn't dare swear at the teacher and the only thing Linda can come out with is "you big worm". Also the scene where Mickey and Edward meet for the first time. There both very curious and the way they deal with it is funny. Even though their physical difference is very clear there's a lot that they don't realise they have in common they contrast greatly. The tragedy more or less comes at the end. And by the play being a tragic comedy is much more realistic and enjoyable to watch. ...read more.