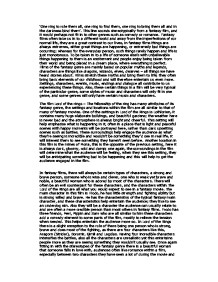 'One ring to rule them all, one ring to find them, one ring to bring them all and in the darkness bind them'. This line sounds stereotypically from a fantasy film, and it would perhaps not fit in to other genres such as comedy or romance. Fantasy films often take us in to a different world and away from the imperfections of our normal life, they are a great contrast to our lives, in fantasy films things are always extremes, either great things are happening, or extremely bad things are occurring; whereas for the everyday person, such things rarely happen and life is just monotonous. To be taken in to a life of someone else's with unbelievable things happening to them is an excitement and people enjoy being taken from their world and being placed in a dream place, where everything is perfect. Films of the fantasy genre are mainly based on popular myths and legends, characters are things like dragons, wizards, elves, dwarves - all things we have heard stories about. Films stretch these myths and bring them to life; they often bring back elements of our childhood and will therefore entertain us even more. Settings, characters, events, music, endings and dialogue all contribute to us experiencing these things. Also, these certain things in a film will be very typical of the particular genre, some styles of music and characters will only fit in one genre, and some genres will only have certain music and characters. The film Lord of the rings - The fellowship of the ring has many attributes of its fantasy genre, the settings and locations within the film are all similar to that of many of fantasy movies. ...read more.

Yet the music depends entirely on what is happening, and what characters are involved, if it is a romance scene, soft, slow music will be played. Yet if it is a battle scene, more upbeat faster music will be played. The music in Lord of The Rings is exactly like the typical fantasy film music, it is mostly slow and soft, but then upbeat and faster when a more extreme event happens. If you've seen one ending in a fantasy film, you've basically seen them all. The endings almost always follow the same structure; the main character kills his enemy, then him and the beautiful woman fall in love and everything is happy. The ending in any film is very important, if the ending is poor, it often makes the whole film poor. During the end of a movie, the viewer's emotions are often at their peak and anything that happens will engage the audience more and more. The ending in a fantasy film are always incredible and unbelievable, as in reality nothing always ends up perfect and happy. Lord of The Rings has this very typical ending, the ring and Saruman are defeated, and Aragorn falls in love with the woman. Although this ending is predictable, it is effective as the film comes to a slow and steady end; it isn't rushed, nor does it drag on. Also because things have gone well in the film, it will make the audience feel good, and therefore even more in to the film, and out of their usual routine. ...read more.

This makes emotions run high in the film as a character the audience have just grown to like, dies. The viewer will be deeper in to the film and taken more so out of their own world. Once again this is another thing that doesn't fit in with the stereotypical fantasy characteristics unlike Lord of The Rings. The words said in a film and how they are spoken is equally important to the events that occur. In Star Wars the characters speak very clearly and with no distinguishable accent, this is the way characters talk in nearly all fantasy films. Also, the words that they use are often longer than those used in everyday life, and are nearly always polysyllabic. This shows intelligence within the film and can engage the viewer more. A lot of Fantasy films follow the usual characteristics, yet there are always some films in the genre that don't follow them quite so well; they will always have various aspects of it, but wont be as stereotypical. Films use many techniques to get the audience engaged in the film and feeling catharsis. The Settings, characters, events, music, ending and dialogue all contribute towards the emotions we feel when watching a film. If the events are sad, we feel sad. Most of these things in a film are unbelievable and incredible, this takes the audience more in to the world of the film, as it isn't something anyone would see in reality, it also entertains and takes someone out of their every day life. The settings, characters, events etc. all reflect each other and work together to make us feel the emotions that the director of the film wants us to feel at the particular moment in the movie. ...read more.