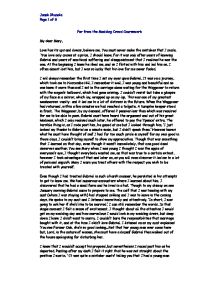 Far from the Madding Crowd Coursework - My dear Mary,

Far from the Madding Crowd Coursework My dear Mary, Love has its ups and downs, believe me. You must never make the mistakes that I made. True love only comes at a price. I should know. For it was only after years of knowing Gabriel and years of emotional suffering and disappointment that I realised he was the one. At the beginning I knew he liked me, and so I flirted with him and led him on. I often almost lost him, but I was so lucky that his love for me never faded. I will always remember the first time I set my eyes upon Gabriel. It was on a journey, which took me to Norcombe Hill. I remember it well. I was young and beautiful and no one knew it more than me! I sat in the carriage alone waiting for the Waggoner to return with the wagon's tailboard, which had gone missing. I couldn't resist but take a glimpse of my face in a mirror, which lay, wrapped up on my lap. This was one of my greatest weaknesses -vanity- and it led me to a lot of distress in the future. When the Waggoner had returned, within a few minutes we had reached a tollgate. A turnpike keeper stood in front. The Waggoner, by my demand, offered 2 pennies less than which was required for me to be able to pass. Gabriel must have heard the argument and out of his great kindness, which I only realised much later, he offered to pay the '2pence' extra. The terrible thing is, as I rode past him, he gazed at me but I looked through him. 'I just looked my thanks to Gabriel on a minute scale, but I didn't speak them.' Heavens knows what he must have thought of me!' I had far too much pride in myself for my own good in those days. ...read more.

Gabriel disagreed with my behaviour towards Boldwood, and in all honesty I felt the same. Though at the time I was full of pride and I couldn't bring myself to tell Gabriel that I knew what I had done was wrong. In the end I sacked Gabriel and gave him a week to leave, but Gabriel was a man that stood behind his opinion hence that he felt that he should leave immediately. I was too stubborn to see what I was losing, for Gabriel to me wasn't just a shepherd but a friend that I could always talk to. Though luckily for me, he soon returned. The day after his departure a large number of my sheep had gone astray in the fields, where they ate some of the clover, they had become severely bloated and when I had realised I was in a state of panic. I could picture what everyone would say about me, a woman running a farm on her own. Then Tall (another one of my workers) came to tell me that there was a way they could be saved, though only Gabriel could perform the operation. At first I was really reluctant to ask for his help after the argument, though I was left with no choice. I had asked Tall to get him from where he was staying. When he returned he told me the words Gabriel had spoken to him, 'beggars mustn't be choosers,' and he wouldn't consider coming back until I had asked him in a proper manner. By this time I was in a state of desperation, so I wrote to him. At the end of the letter I can recall writing the words, 'do not desert me Gabriel!' When he returned, almost in an instant a majority of the sheep had been cured. I remember thinking to myself how grateful I was that Gabriel was present. ...read more.

You see Mary, I have written to you to explain the mistakes that I made, and to worn you not to lead the same painful life that I did. What I had with Troy was wild and passionate. He was young and unpredictable. I only loved him from the outside. That's probably the reason that he was able to cheat and lie to me so easily. When I married Troy I lost everything that I valued, my freedom, independence and pride. My love for Troy was just superficial. He never really loved me and I only married him in haste. When we were married our relationship changed completely. I could see him for what he really was, I was taken by his looks but I learnt the hard way that looks are only skin deep, they have no reflection upon your soul. How my affairs with Boldwood started was through a thoughtless joke. I never meant for it to go as far as it did. What I did to this man haunts me even today. I suppose the whole escapade shows how immature I was when it came to love and relationships and also how vain I was. I should have never tested my beauty on him. Mary, my darling you must never play with peoples emotions, always be straight and honest. Thankfully after all of that, as you know I married my beloved Gabriel. I never realised it at first but he was my perfect partner. He was honest courageous and always reliable. He was always there for me when I needed someone, like when the fire started or during the storm. Our love was pure. You see, love isn't just looks. Love comes from within. Love is valuing and recognising the inner-strengths of your partner. A man should have morals and integrity. He should always be honest and true. Mary, I have lived a life of emotional hardship, take what I have told you and don't make the same mistakes I did. From your loving grandmother Bathsheba Oak ?? ?? ?? ?? Janak Bhundia Page 4 of 3 ...read more.