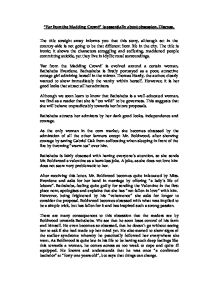 &quot;Far from the Madding Crowd&quot; is essentially about obsession. Discuss.

"Far from the Madding Crowd" is essentially about obsession. Discuss. The title straight away informs you that this story, although set in the country-side is not going to be that different from life in the city. The title is ironic; it shows the characters struggling and suffering, maddened people committing suicide, yet they live in idyllic rural surroundings. 'Far from the Madding Crowd' is evolved around a certain woman, Bathsheba Everdene. Bathesheba is firstly portrayed as a poor, attractive cottage girl admiring herself in the mirror. Thomas Hardy, the author, clearly wanted to show immediately the vanity within herself. However, it is her good looks that attract all her admirers. Although we soon learn to know that Bathsheba is a well-educated woman, we find as a reader that she is "too wild" to be governess. This suggests that she will behave unpredictably towards her future proposals. Bathsheba attracts her admirers by her dark good looks, independence and courage. As the only woman in the corn market, she becomes obsessed by the admiration of all the other farmers except Mr. Boldwood, after showing courage by saving Gabriel Oak from suffocating when sleeping in front of the fire by throwing "warm tea" over him. ...read more.

However, after the wedding, Fanny thought that Troy was just implying that the wedding was to be the next day. She was so blinded by love for him, that she didn't see his anger at one who was so obsessed with him. He however, was obsessed with is pride, "You fool, for so fooling me!" When Troy first meets Bathsheba "in a young plantation of tapering ferns", her skirt is caught on his spur. Whilst trying to relieve her, he remarks on her beauty "thank you for the sight of such a beautiful face". Eventually they part, but once home, Bathsheba asks Liddy, her maid, many questions about this new encounter. Both, Troy and Bathsheba are attracted by each other's looks. Troy is very attractive, articulate but "common place in action". He is better educated than an average soldier, but often lies to women. For example, when asked if he knew who the woman he was talking to had been (Liddy), he replied to Bathsheba "I know her by sight". This was also said as a way of protection. He also once lied to Bathsheba when showing her his sword fighting. He tells her that the sword is not very sharp until the end of the exercise, when he tells her the truth, " this sword will shave like a razor". ...read more.

In a crisis he acts calmly and bravely saving Bathsheba's crops in the fire and storm. He honestly condemns Bathsheba's conduct to Boldwood on a number of occasions, twice facing dismissal. He is dismayed by Bathsheba's "infatuation" with Troy, attempting to warn her against trusting him. When hiding his feelings he says "he adored Bathsheba". Hardy points out the contrasts between homely Oak" and the attractive Troy whose "deformities lay deep down from a woman's vision". There is a big contrast between Oak and Troy. Another difference between these characters is that Troy gambles and Gabriel "reckons up the exact financial value" of each risk threatened by the storm. At the end of the story it turns for the better for Oak. He gets promoted from being the shepherd to the bailiff, his industry is awarded and he is offered a hare of the profits to manage Boldwood's farm after his imprisonment. Bathsheba realises at the end after Troy's death, that she becomes weak and depressed and increasingly dependant on Gabriel. This helps her notice that she loves him and finally agrees to marry him. This shows that more or less the whole novel is about obsession between each of the characters. It also has a lot of romance in it with hard realism running through it. Additionally, it shows that not only is it the world that loses control in natural disasters but also people lose control in emotional disasters. ...read more.