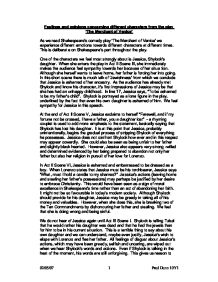 Feelings and opinions concerning different characters from the play 'The Merchant of Venice'.

Feelings and opinions concerning different characters from the play 'The Merchant of Venice' As we read Shakespeare's comedy play 'The Merchant of Venice' we experience different emotions towards different characters at different times. This is deliberate on Shakespeare's part throughout the play. One of the characters we feel most strongly about is Jessica, Shylock's daughter. When she enters the play in Act II Scene III, she immediately makes the audience feel sympathy towards her because of her situation. Although she herself wants to leave home, her father is forcing her into going. In this short scene there is much talk of 'Jewishness' from which we conclude that Jessica is ashamed of her ancestry. As the audience has already met Shylock and know his character, it's first impressions of Jessica may be that she has had an unhappy childhood. In line 17, Jessica says, "To be ashamed to be my father's child". Shylock is portrayed as a lone figure in the play, underlined by the fact that even his own daughter is ashamed of him. We feel sympathy for Jessica in this speech. At the end of Act II Scene V, Jessica exclaims to herself "Farewell, and if my fortune not be crossed, I have a father, you a daughter lost" - a rhyming couplet is used to add more emphasis to the statement, basically saying that Shylock has lost his daughter. It is at this point that Jessica, probably unintentionally, begins the gradual process of stripping Shylock of everything he possesses. Jessica does not confront Shylock however and in this respect may appear cowardly. She could also be seen as being unfair to her father and slightly black hearted. ...read more.

By using his good name to provide Bassanio with money he also puts his own life in jeopardy as security for a loan. We see Antonio as kind, loyal and loving and have a great deal of respect for him when he does not even let his life stand in the way of helping a friend. Antonio's character seems to be ambiguous from the start. The play begins "In sooth I know not why I am so sad" and responds to Solanio and Salerio's sensible ideas with "Believe me, no". He cannot understand himself so how can we? However, Antonio seems to be well respected in the play. This is supported by Gratiano's words "I love thee, and it is my love that speaks". In Act I Scene III Antonio even thinks his enemy, Shylock, might change. He says, "The Hebrew will turn Christian, he grows kind". This is a misjudgement but an insight into his forgiving nature. His words makes our respect for Antonio strengthen. Antonio seems to use Shylock's hatred of him as bait to persuade him to make a deal. This is clever and we regard Antonio highly because of it. Bassanio clearly trusts Antonio. He shows this on numerous occasions during the play such as when the former asks Antonio for money. He obviously knows he can rely on him, even though he is already in debt to him. He also travels back to Venice at Antonio's wishes to see him die. He even asks Shylock to take his life rather than Antonio's life - "The Jew shall have my flesh, bones, blood and all". The positive way in which Shakespeare portrays Bassanio's trust in Antonio, also strengthens our trust in him. ...read more.

In the 'Trial Scene' Nerissa introduces Balthazar (Portia) Portia soon speaks her 'Beauty Speech' but this has no effect on Shylock as he insists on his bond. Portia is very as she lets clever; letting Shylock think he is going to win, and then, once he has had his chance, she lets him down at the last minute. We respect her intelligence highly. We have to admire Portia as Shylock does for trying to change his mind but when she sees it is no use, she lets him sharpen his knife and walk up to Antonio. However, she declares that not one drop of blood may be spilt. Shylock, tries to take money instead but that is also refused. We have to admire Portia's cunning in the scene. It is then stated that half Shylock's goods must go to Antonio and half must go to the State of Venice. His life is also in the balance. In Act IV Scene I, Portia and Nerissa ask Bassanio and Gratiano respectively for gifts. They agree to give their wives, who they think are the doctor and the messenger boy their rings. We admire Portia's cunning once again in this scene but she also loses respect from the reader in light of here cruel and uncalled for actions. In the last Act, (Act V), Portia confronts Bassanio about the whereabouts of his ring. He tells the truth and eventually Portia tells him the truth, that she was teasing him. Her point that she has successfully made is that now Antonio's life has been saved, the bond that matters now is the bond with Portia. Portia's love for Bassanio, and therefore, his friend Antonio, overpowers Shylock's greed and defeats him. She demonstrates the power of love and friendship over greed. 02/05/07 1 Paul Dunn 10Y1 ...read more.