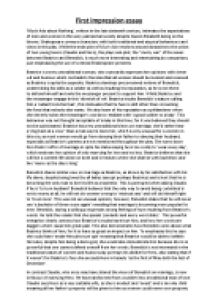 ﻿First impression essay ?Much Ado about Nothing?, written in the late sixteenth century, intimates the expectations of men and women in this very patriarchal society despite Queen Elizabeth being on the throne. Shakespeare conveys characters with both traditional and atypical behaviours and views in this play. While the main plot of Much Ado revolves around obstacles to the union of two young lovers (Claudio and Hero), the plays sub-plot, the "merry war" of the sexes between Beatrice and Benedick, is much more interesting and entertaining by comparison, just emphasizing the use of contrast Shakespeare presents. Beatrice is a very untraditional woman, who outwardly expresses her opinions with clever wit and humour which contradicts the idea that all women should be modest and reserved as Beatrice is quite the opposite. Beatrice develops preconceived notions of Benedick, undermining his skills as a soldier as well as insulting his reputation, as he is not there to defend himself and only the messenger present to support him. Whilst Beatrice and the messenger engage in this ?skirmish of wit? Beatrice insults Benedick's stature calling him a ?valiant trencherman?, this insinuates that he has no skill other than consuming the food that nobody else wants. ...read more.

He tells the reader that she speaks ?poniards and every word stabs?. This powerful metaphor clearly conveys how Beatrice?s insults have hurt him, and how her words are daggers which cause him great pain. This also demonstrates how Benedick cares about what Beatrice thinks of him, for it to have as great an impact on him. To emphasise this he says she could have ?made Hercules turn spit? meaning that Beatrice would be able to belittle Hercules, despite him being a demi-god; she would also domesticate him because she is so powerful that one cannot defend oneself from her words. Benedick is not interested in the traditional values of women and humorously portrays his dislike for Hero, also stating that if it weren?t for Beatrice?s fury she exceeds Hero in beauty ?as the first of May doth the last of December?. In contrast Claudio, who once may have shared the views of Benedick on marriage, is now in favour of marrying Hero. He has transformed from a soldier into a traditional man of love. Claudio sees Hero as a very suitable wife, as she is modest and ?sweet? and is an only child meaning all her father?s property will be given to him as women could never own property in this era. ...read more.

does have a sense of humour but chooses not to use it, being in favour of the reputation of a modest, traditional lady unlike Beatrice. So in conclusion we have two relationships which involve very different types of people with very different opinions, from the Elizabethan era. Hero and Claudio represent the very typical romantic relationship in which Hero is ruled by her father to marry whom he pleases and not for love necessarily, also Claudio attempt to woo Hero after the confirmation that she is a modest girl and is further enticed after discovering that she is her father?s only child. In contrast Benedick and Beatrice are very untraditional members of society in this era; Beatrice flaunts her opinion about everything and even mocks gentlemen such as Don Jon and Benedick which is quite unexpected of a Lady in the time, in addition she expresses often how she shall live a happy life alone and never marry. Benedick similarly wishes to never marry and matches Beatrice?s? quick wit and so involves himself in a ?skirmish of wit with her. With these characters, Shakespeare is able to create and humorous and exciting the play that manages to entice the audience throughout. ...read more.