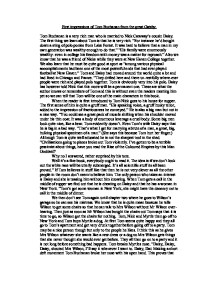 First impressions of Tom Buchanan from the great Gatsby

First impressions of Tom Buchanan from the great Gatsby. Tom Buchanan is a very rich man who is married to Nick Caraway's cousin Daisy. The first thing we learn about Tom is that he is very rich. "For instance he'd bought down a sting of polo ponies from Lake Forest. It was hard to believe that a man in my own generation was wealthy enough to do that." "His family were enormously wealthy- even in college his freedom with money was a matter for reproach." Also we know that he was a friend of Nicks while they were at New Haven College together. We also learn that he must be quite good at sport as "among various physical accomplishments had been one of the most powerful ends that had ever played football at New Haven." Tom and Daisy had moved around the world quite a lot and had lived in Chicago and France. ...read more.

"That's what I get for marrying a brute of a man, a great, big, hulking physical specimen of a man." (She says this because Tom hurt her finger.) Although Tom is quite well educated he is not the sharpest tool in the shed. "Civilisations going to pieces broke out Tom violently. I've gotten to be a terrible pessimist about things, have you read the Rise of the Coloured Empires by this Man Goddard? Why no I answered, rather surprised by his tone. Well it's a fine book, everybody ought to read it. The idea is if we don't look out the white race will be utterly submerged. It's all scientific stuff its all been proved." If Tom believes in stuff like that then he is not very clever as all the other people in the room don't seem to believe him. The only person who takes an interest is Daisy and she is teasing him without him knowing. ...read more.

They all then go on to a party and it is not long before something bad happens. Tom breaks Myrtles nose. "Daisy, Daisy, Daisy, shouted Mrs Wilson, I'll say it whenever I want to. Daisy, Dai. Making a short deft movement Tom Buchanan broke her nose with his open hand. This proves that Tom is not very nice and obviously has very little patience before resorting to violence. I think that Tom is going to be very important later on in the story and I believe that he will do something that he is going to regret or be punished for. In other words he will be the bad guy. Even his wife seems to think that he is not a very nice person. Even the way he is described gives off something ominous about him. I think that he will kill someone or he will be something to do the thing that was the foul dust that floated in the wake of Gatsby's dreams. ...read more.

This question orientates around how the readers of F. Scott Fitzgerald's 'The Great Gatsby' respond to the character of Tom Buchanan in the first chapter. We see an arrogant, unfaithful, bigoted bully of a man and this should be recognised ...

This question orientates around how the readers of F. Scott Fitzgerald's 'The Great Gatsby' respond to the character of Tom Buchanan in the first chapter. We see an arrogant, unfaithful, bigoted bully of a man and this should be recognised by all candidates, as there is very little else to Buchanan other than his money and what he squanders it on. DFitzgerald wrote the character as a man who'se size and status gets him what he wants, rather than possessing any fundamental decencies and thus that candidates should respond in a similar way as aforementioned. But in doing so, they must justify their response. To a vague extent, this has been done by the candidate, though I would argue that the use of rhetorical devices towards the examiner may not suffice as appropriate analysis.

The Level of Analysis here is quite superficial and seems to only loosely discuss the information that Fitzgerald explicitly discloses to us in his narration. The commentary on Tom's breaking of Myrtle's nose is somewhat irrelevant as this scene is not part of our "first impressions" of Tom because this scene is from Chapter 2. This digression from the steer of the question (which implicitly suggests candidates should only concern themselves with Chapter 1) shows that there was little attention paid to it, or possibly even the book, with the candidate mistaking that above scene to be in Chapter 1. As a result, this candidate shows either an ignorance to what the question is asking (candidates receives no marks for analysis elsewhere) or an insufficient understanding of the novel, both of which lose valuable marks. It is imperatiev that candidate read the question carefully and understand the novel and where the key moments occur.
It would also serve the candidate well if they inverted their answer to quote ratio. There is too much quoting here and not enough analysis to delve much further than puddle deep into Fitzgerald's intentions with Tom's character. Quoting blocks of text is not only time-consuming, it elicits absolutely no marks and should be avoided at all costs. Quoting the entire scene where Tom breaks Myrtle's nose is a waste of time. Instead the candidate should've concentrated less on Myrtle and more on the phrase "with a short, deft movement", which shows his strength and his short temper when he doesn't get his way. This tells us more about his character and gives candidates more to analyse than an indigestible chunk of text.

The Quality of Written COmmunication is fine. There isn't any part of the answer that leaps out as a particularly impressive use of grammar or punctuation, and so the answer reads fery straightfowardly, but this loses no marks, so is no real matter. However, for candidates hoping to achieve the highest band of marks there needs to be evidence of a confident and enthusaistic writer, and a variety of punctuation can do this, so it is greatly recommended that this candidate familiarises themselves with more complex punctuation points like colons, semi-colons and parentheses.