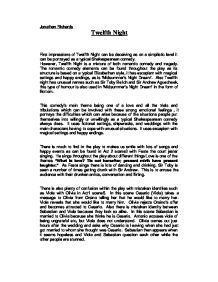 Jonathan Richards Twelfth Night First impressions of Twelfth Night can be deceiving as on a simplistic level it can be portrayed as a typical Shakespearean comedy. However, Twelfth Night is a mixture of both romantic comedy and tragedy. The romantic comedy elements can be found throughout the play as its structure is based on a typical Elizabethan style, it has escapism with magical settings and happy endings, as is 'Midsummer's Night Dream'. Also Twelfth night has unusual names such as Sir Toby Belch and Sir Andrew Aguecheek, this type of humour is also used in 'Midsummer's Night Dream' in the form of Bottom. This comedy's main theme being one of a love and all the trials and tribulations which can be involved with these strong emotional feelings, it portrays the difficulties which can arise because of the situations people put themselves into willingly or unwillingly as a typical Shakespearean comedy always does. It uses fictional settings, shipwrecks, and weddings with the main characters having to cope with unusual situations. It uses escapism with magical settings and happy endings. There is much to find in the play to makes us smile with lots of songs and happy events as can be found in Act 2 scene3 with Feste the court jester singing. He sings throughout the play about different things Love is one of the themes "What is love? ...read more.

There is also quick language used between Malvolio and Olivia in the same scene, "What manner of a man?" "Of very ill manner." After looking further into the play it seems that it cannot be classed comfortably as a comedy. Though the play has the necessary elements to be classed as a typical Shakespearian comedy it has a 'darker' side. For example some of the cruelty used against Malvolio. In particular the letter prank in which Maria, Sir Toby and Sir Andrew come up with a very cruel but humorous prank to play on Malvolio in the form of a love letter. It is not the effects of the prank that are cruel but the motives for playing the prank in the first place. The motive for Maria to play the trick on Malvolio is because she dislikes his vanity. Malvolio had not really done anything to deserve what he got, apart from being vane. Even though this is quite cruel it is quite humorous and is commonly known as Black comedy. The prank is not allowed to end there, it escalates into a potentially quite cruel situation. A perfect example of this would be Act 4 Scene 2 where Feste disguises himself as Sir Topas the curate. Feste torments Malvolio and treats him as if he were mad. Malvolio protests that he is not mad, but Feste (as Sir Topas) ...read more.

Also Feste who is meant to be a clown but his word play is more philosophical than amusing. Orsino himself threatens to take Viola/Cesario's life for taking the love of his life. On first reading this may be seen as a funny misunderstanding but really it is an angry and bitter mess. The ending of the play could be seen as a happy ending on the surface but it is not really happy at all. Even though there are marriages for certain individuals there are other people left either unhappy or vowing revenge. For example Orsino said he would kill Viola for taking the love of his life. Malvolio is the one laughed at by the other characters because his love for Olivia is revealed, he does not join in the humour of the celebrations. He has no hope of finding respect or happiness in the same household and remains an angry outsider vowing revenge. We do not find out what happens to Antonio, whether he is released and reunited with his friend. This can surely not be deemed as a very happy ending to the play with out all the loose ends tied up. In conclusion I would say that this play is definitely not a tragedy but it cannot be classed comfortably as a comedy because of the elements of cruelty and sadness. The last song from Feste is too sombre for us to leave the theatre or finish the book laughing; in fact it would be quite the opposite. The play is maybe more entertaining for its mixture of light and dark, happy and sad. ...read more.