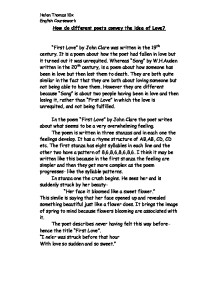 &quot;First Love&quot; by John Clare was written in the 19th century

How do different poets convey the idea of Love? "First Love" by John Clare was written in the 19th century. It is a poem about how the poet had fallen in love but it turned out it was unrequited. Whereas "Song" by W.H.Auden written in the 20th century, is a poem about how someone has been in love but then lost them to death. They are both quite similar in the fact that they are both about loving someone but not being able to have them. However they are different because "Song" is about two people having been in love and then losing it, rather than "First Love" in which the love is unrequited, and not being fulfilled. In the poem "First Love" by John Clare the poet writes about what seems to be a very overwhelming feeling. The poem is written in three stanzas and in each one the feelings develop. It has a rhyme structure of AB,AB, CD, CD etc. The first stanza has eight syllables in each line and the other two have a pattern of 8,6,8,6,8,6,8,6. I think it may be written like this because in the first stanza the feeling are simpler and then they get more complex as the poem progresses- like the syllable patterns. ...read more.

I think that he is thinking about why he puts up with all the pain he has suffered because of love, and that is her. He then talks about how he has lost his heart for good. "My heart has left its dwelling place And can return no more." He is again emphasising what he said in stanza one- about her stealing his heart. He is saying that his heart belongs to her, because he loves her so much. And also that his heart will never return, because he will never stop loving her. I think that John Clare wrote the way he did about love, because he wanted to open his heart, and give a true account of what love really feels like. The mood of the poem is quite sad and I feel very sorry for the poet and how he is feeling. I think that the poem may be based on Clare's own experiences of Love, as he was unable to be with the woman that he loved. This is similar to the feelings of the writer of "Song" - W.H.Auden as he is describing in his poem about the loss of his true love through death, so both poems evoke the same feelings out of the reader. ...read more.

They also both rhyme. The main similarities of the two poems, "First Love" and "Song" is that they are both written about Love and how they can't have it with who they want. In "First Love" the poet tells about the girl he has seen and fallen in love with, but it can not be fulfilled. Similarly in "Song" the poet writes about the man he loved but can't have because he died. They are both quite sad poems. The main differences are the love in "Song" can't occur because someone has died, whereas in "First Love" both people are alive it is just either one sided love, or not allowed. From looking into John Clare's history I found out that he was not allowed to marry the girl he loved, because she was a better class that him. Also "Song" concentrates very much on the bad bits, whereas "First Love" reflects on some of the good feelings the poet has had because of love. Personally I preferred "Song" by W.H.Auden because it felt more meaningful. Although I did like "First Love" it didn't touch me as much. I think I learnt a lot from both poems, it taught me that love can be very painful and everyone suffers because of it at some time in their life. ?? ?? ?? ?? Helen Thomas 10x English Coursework ...read more.