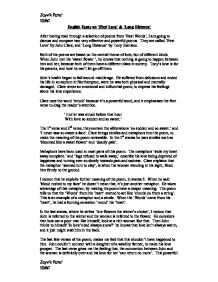 English Essay on 'First Love' & 'Long Distance' After having read through a selection of poems from 'Best Words', I am going to discuss and compare two very effective and powerful poems. They are called 'First Love' by John Clare, and 'Long Distance' by Tony Harrison. Both of the poems are based on the central theme of love, but of different kinds. When John met his 'sweet flower ', he knows that nothing is going to happen between him and her, because both of them have a different class in society. Tony's love is for his parents, and how he can't let go off them. John's health began to fail around middle age. He suffered from delusions and ended his life in an asylum in Northampton, were he was both physical and mentally damaged. Clare wrote an emotional and influential poem, to express his feelings about his love experience. Clare uses the word 'struck' because it's a powerful word, and it emphasises the first verse to drag the reader's attention. ' I ne'er was struck before that hour With love so sudden and so sweet.' The 1st verse and 3rd verse, they contain the alliterations 'so sudden and so sweet.' ...read more.

The last verse gives me the feeling that, the connection between John and the woman is definitely over and his love for her 'can return no more'. This powerful poem makes us sympathetic for the poet and probably this is where the success of the poem lies. The second poem is 'Long distance' by Tony Harrison. This poem is one from a sequence of poems, in which Harrison has to face terms with family death. In the opening stanza, he drags the reader's attention by creating an image in our mind, in the opening verses. In verse 2 Tony says that his father 'kept her slippers warming by the gas', making the reader conjure up a picture of her pink fluffy slippers next to the flickering flames of the gas fire. In verse 3 Harrison creates a moving image in the reader's mind. This is because how his dad 'put hot bottles her side of the bed'. That little image says that the father thinks her wife is still alive. As well as putting the hot water bottles, he wastes money on her, by going down to the bus station and renew her 'transport pass.' ...read more.

In my opinion Tony Harrison concentrates on the syllable pattern, to make his poem rhyme and be easy to unlock the significance of the poem. He uses images at the start, which creates the whole setting of the poem, and after he concentrates on the best way of seizing the reader's attention. He uses the effect of different syllable patterns in the last stanza, to make it stand out. Harrison's heart and mind are in the same position of his father, when he wasn't able to let go off the death of his wife. This time it's about Tony not able to, let go off his parents' death. He has put a lot of thought and emotional damage in the poem. 'Long Distance' by Tony Harrison, is the poem that grabs my interest. It gives me something to think about in the future, when my parents are gone. It has a good rhythm and rhyme, for it to be my chosen poem out of the poems. It is straight and simple with no clever language in it. Overall I reckon 'Long distance' is more of a creative poem than 'First Love' by John Clare. Jayvik Patel 10MC Jayvik Patel 10MC ...read more.