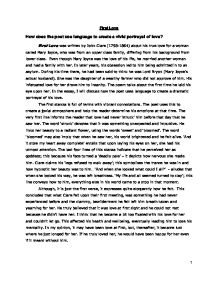 First Love How does the poet use language to create a vivid portrayal of love? First Love was written by John Clare (1793-1864) about his true love for a woman called Mary Joyce, who was from an upper class family, differing from his background from lower class. Even though Mary Joyce was the love of his life, he married another woman and had a family with her. In later years, his obsession led to him being admitted in to an asylum. During his time there, he had been said to think he was Lord Bryon (Mary Joyce's actual husband). ...read more.

The very first line informs the reader that love had never 'struck' him before that day that he saw her. The word 'struck' denotes that it was something unexpected and impulsive. He links her beauty to a radiant flower, using the words 'sweet' and 'bloomed'. The word 'bloomed' may also imply that when he saw her, his world brightened and he felt alive. 'And it stole my heart away complete' entails that upon laying his eyes on her, she had his utmost attention. The last four lines of this stanza indicate that he perceived her as goddess; this because his face turned a 'deadly pale' - it depicts how nervous she made him. ...read more.

This concludes that what Clare felt upon their first meeting, was something he had never experienced before and the clammy, bewilderment he felt left him breath taken and yearning for her. He truly believed that it was love at first sight and he could not rest because he didn't have her. I think that he became a bit too fixated with his love for her and couldn't let go. This affected his health and wellbeing, eventually leading him to lose his mentality. In my opinion, it may have been love at first, but, thereafter, it became lust where he just longed for her. If he truly loved her, he would have been happy for her even if it meant without him. ` ?? ?? ?? ?? 1 ...read more.