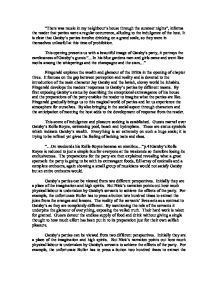 Fitzgerald explores the wealth and glamour of the 1920s in the opening of chapter three. It focuses on the gap between perception and reality and is devoted to the introduction of the main character Jay Gatsby and the lavish, showy world he inhabits.

"There was music in my neighbour's house through the summer nights", informs the reader that parties were a regular occurrence, alluding to the indulgence of the host. It is clear that Gatsby's parties involve drinking on a grand scale, so they were in themselves unlawful at this time of prohibition. This opening presents us with a beautiful image of Gatsby's party, it portrays the carelessness of Gatsby's guests "...In his blue gardens men and girls came and went like moths among the whisperings and the champagne and the stars..." Fitzgerald explores the wealth and glamour of the 1920s in the opening of chapter three. It focuses on the gap between perception and reality and is devoted to the introduction of the main character Jay Gatsby and the lavish, showy world he inhabits. ...read more.

The preparations for the party are then explained revealing what a great spectacle the party is going to be with its extravagant foods, full array of cocktails and a complete orchestra, again showing a small group of musicians would not satisfy Gatsby but an entire orchestra would. Gatsby's parties can be viewed from two different perspectives. Initially they are a place of the imagination and high spirits. But Nick's narration points out how much physical labour is undertaken by Gatsby's servants to achieve the effects of the party. For example, the unfortunate Butler has to press a button two hundred times to extract the juice from the oranges and lemons. The reality of the servants' lives acts as a contrast to Gatsby's as they are completely different. ...read more.

Their hard work is taken for granted. Guests devour the endless supply of food and drink without giving a single thought to how much effort has been put in to its preparation just for their own selfish pleasure. - Loneliness Even in the midst of a thousand laughing, merry people, Gatsby is still separate from them; he is still alone. "People were not invited-- they went there . . . Sometimes they came and went without having met Gatsby at all"(p.41). This is the first glimpse that can be seen of Gatsby's loneliness. Gatsby throws gigantic parties in which no one seems to care if he is there or not. They come and leave; they don't really care about him. Quote from pg 51. This reveals firstly that, although Gatsby throws big parties, he is somewhat of a loner. Gatsby looks over his guests approvingly while unknown to him they are concocting wild and fanciful rumours about his past. ...read more.