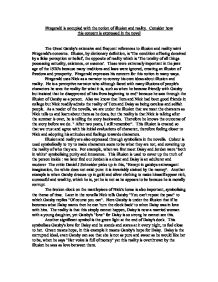 Fitzgerald is occupied with the notion of illusion and reality. Consider how this concern is expressed in the novel The Great Gatsby

Fitzgerald is occupied with the notion of illusion and reality. Consider how this concern is expressed in the novel The Great Gatsby's extensive and frequent references to illusion and reality mirri Fitzgerald's concerns. Illusion, by dictionary definition, is 'The condition of being deceived by a false perception or belief', the opposite of reality which is 'The totality of all things possessing actuality, existence, or essence'. These were extremely important in the jazz age of the 1920's because many traditions and laws were ignored, creating an illusion of freedom and prosperity. Fitzgerald expresses his concern for this notion in many ways. Fitzgerald uses Nick as a narrator to convey his own ideas about illusion and reality. He is a perceptive narrator who although faced with many illusions of people's characters he sees the reality for what it is, such as when he became friendly with Gatsby but insisted that he disapproved of him from beginning to end" because he saw through the illusion of Gatsby as a person. Also we know that Tom and Nick had been good friends in college but Nick readily admits the reality of Tom and Daisy as being careless and selfish people. ...read more.

To Gatsby, Daisy is his goal, much like the Holy Grail and the strive for her keeps him aiming high in life. This heroic way of seeing Gatsby shows us the reality of life's need for hope. Something solid and secure to aim for. Gatsby's reality of needing this goal reflects our need for something to dream for. This is Fitzgeralds way of speaking to the audience through Gatsby. Society in the novella also portrays reality and illusion by talking about gentlemen. In the eyes of society, as he has the upbringing, money and education, Tom would be seen as more getlemanlike yet he is rude, which is shown at Myrtle's gathering when he "yawned audibly" as Mrs McKee was talking. He has a lack of manners and respect that Gatsby is quick to express, although Gatsby is corrupt and involved in the black market. It is difficult to understand who is the illusion and who is the reality here, as gentlemen can be defined either as wealthy and well brought up or polite and well-mannered. The theme of the American Dream seems to be an illusion in the novella. It is desperately sought after, Wilson worked very hard to get him and Myrtle away from the Valley of Ashes but it was out of reach. ...read more.

Myrtle is also parallelled with Daisy. They are both drawn to the illusion of wealth and money. For Myrtle it means aspiring to be with Tom, Tom is Daisy's reality but Daisy aspires to be with Gatsby. Fitzgerald also uses synesthesia to describe the houses and parties, in order to create a magical illusion. When Gatsby is telling his and Daisy's story, he says it in a dream-like trance and describes it to be beautiful and perfect, with a "rose-coloured" aura which does not sound like reality at all, it enhances the idea of Gatsby believeing illusions. Fitzgerald, when writing The Great Gatsby, seems intrigued by the paradox of illusion and reality. They intertwine, characters such as Gatsby relived illusion so many times he believed it to be reality. Perhaps this is how Fitzgerald wanted his own life to be, during his life he always aspired to be successful but the dream - the illusion of what he wanted to become - never became reality. Perhaps the most meaningful quote of the novella, this reflects the idea of dreams being magical and mystical - yet totally unattainable. "A satisfactory hint of the unreality of reality, a promise that the rock of the world was founded securely on a fairy's wing." ...read more.