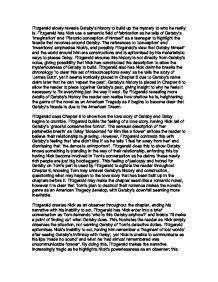 Fitzgerald uses Chapter 6 to show how the love story of Gatsby and Daisy begins to crumble.

Fitzgerald slowly reveals Gatsby's history to build up the mystery to who he really is. Fitzgerald has Nick use a semantic field of fabrication as he tells of Gatsby's 'imagination' and 'Platonic conception of himself' as a teenager to highlight the facade that revolves around Gatsby. The references to 'conception' and 'inventions' emphasise Nick's, and possibly Fitzgerald's view that Gatsby himself and the world around him are constructions and is epitomised by his materialistic ways to please Daisy. Fitzgerald ensures this history is not directly from Gatsby's voice, giving possibility that Nick has constructed the description to allow the mysteriousness of Gatsby to build. Fitzgerald also has Nick claim he breaks the chronology 'to clear this set of misconceptions away' as he tells the story of 'James Gatz', yet it seems ironically placed in Chapter 6 due to Gatsby's naive claim later that he can 'repeat the past'. ...read more.

Fitzgerald uses Chapter 6 to show how the love story of Gatsby and Daisy begins to crumble. Fitzgerald builds the feeling of a love story, having Nick tell of Gatsby's 'graceful conservative foxtrot'. The sensual description of 'her perishable breath' as Daisy 'blossomed for him like a flower' entices the reader to believe their relationship is growing. However, Fitzgerald contrasts this with Gatsby's feeling that 'she didn't like it' as he tells 'I feel far away from her' and dismissing that 'the dance is unimportant'. Fitzgerald does this to show Gatsby knows something is standing in the way of their relationship, enforcing this by having Nick become involved in Tom's conversation as he claims 'these newly rich people are just big bootleggers'. ...read more.

Fitzgerald has Nick enter into a brief conversation as Tom demands 'who is this Gatsby anyhow?' and insists 'I'll make a point of finding out' what Gatsby does. This frustrates the reader as Nick simply observes the situation, not warning Gatsby of Tom's detective duties. Fitzgerald epitomises Nick's inability to act, having him remember a 'fragment of lost words' after seeing Gatsby's intimacy with Daisy; yet Nick is unable to communicate as his lips 'made no sound' and what he 'had almost remembered was uncommunicable forever'. By doing this, Fitzgerald makes the narrative increasingly tragic as he highlights Nick's powerlessness as an observer; this also encapsulates the reader's helplessness as they cannot intervene and prevent Gatsby's fate. Therefore, Fitzgerald makes it clear Nick simply observes Gatsby's story throughout the novel and chooses not to act when he knows of Tom's jealousy, irritating the reader as they can do nothing. ...read more.

This essay engages well with the task, having a sustained focus on the story's construction and the techniques Fitzgerald uses. I liked how the essay focuses on the significance of the chapter as well as the techniques within, as it ...

This essay engages well with the task, having a sustained focus on the story's construction and the techniques Fitzgerald uses. I liked how the essay focuses on the significance of the chapter as well as the techniques within, as it shows a strong understanding of the plot and the importance of the chapter in terms of Gatsby and Daisy's love failing. I would've swapped around the second and third paragraphs, as it could then conclude upon points made in the earlier paragraph. This would allow a discussion of the importance of Nick's lack of action in this chapter, thus irritating the reader.

The analysis in this essay is strong, discussing Fitzgerald's craft throughout. I liked how structure was explored in the first paragraph, as this is often neglected in essays for the more favourable imagery and language analysis. The reader response is always explored, for example "By Fitzgerald revealing more details of GatsbyÃ¢â‚¬â„¢s history the reader can realise how shallow he is". I think the link to the American Dream seems a bit forced, as there isn't much discussion of desire for money and wealth which would naturally be associated with this. The language analysis is good, but I would've liked it to have been discussed further. For example when discussing "the sensual description" there could've been an exploration of the flower imagery giving warning that their relationship will soon die. The narrative perspective is explored well, and there is perceptive analysis of Nick being irritating as he does nothing. I like the discussion of the reader being helpless, yet the essay could've elaborated upon this - I would've mentioned the growing sympathy and fondness for Gatsby's character, linking to the love story mentioned earlier.

This essay is structured well despite its lack of an introduction and conclusion. I would note that this is from an essay which does not assess structure (also known as AO1) so there is no need for an introduction or conclusion. Always check if this is the case, as you could be wasting valuable time which is better spent analysing. The style flows very nicely, and this allows for a convincing argument. Spelling, punctuation and grammar are strong!