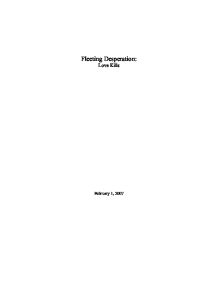 Fleeting Desperation: Love Kills February 1, 2007 While both stories, "A Rose for Emily" by Faulkner and "Story of an Hour" by Chopin, approach the topic of love, the consequential results lead to a difference with death: murderer or victim. In "A Rose for Emily", Miss Emily Grierson suffers from a desperation for love that opposites Mrs. Mallard's aspiration for independence in "Story of an Hour". Their contrasting personalities help emphasis the demise to which both women come upon. The pressures both women share from society place added stress against their efforts to pursue the love they seek. Society dictates the manner in which both women are to behave, and expects of them to do so accordingly. Their climaxes not only conflict with each other, but display the tragedy love can cause under the particular circumstances. The contrast between the two women's perspective on love explains the series of their personal events to follow. Miss Emily is desperate for love and suffers denial when faced with loss, "She told them that her father was not dead. She did that for three days, with the ministers calling on her, and the doctors, trying to persuade her to let them dispose of the body." (Faulkner 93). ...read more.

Mrs. Mallard sought something she could hardly understand until her husband's death. She aimed for something that was completely unacceptable for a married woman, a freedom that was unascertainable until she discovered she was a widow. There would be no one to live for during those coming years; she would live for herself. There would be no powerful will bending her in that blind persistence with which men and women believe they have a right to impose a private will upon a fellow creature. A kind intention or a cruel intention made the act seem no less a crime as she looked upon it in that brief moment of illumination." (Chopin 78). Society's expectations upon Miss Emily and Mrs. Mallard kept them from acceptably embracing their true love. The climaxes of both, "A Rose for Emily" and "Story of an Hour" display a contraposition to each other. The town's discussions over Miss Emily's love affair are the only inclination towards her actions hereafter. When she first begun to be seen with Homer Barron, we had said, 'She will marry him.' Then we said, 'She will persuade him yet,' because Homer himself had remarked - he liked men, and it was known that he drank with the younger men in the Elks' Club - that he was not a marrying man." ...read more.

(Chopin 79). After experiencing such clarification, Mrs. Brently died to what doctors called, "heart disease - of joy that kills." (Chopin 79). However, following her thoughts throughout the story, we know that after feeling such happiness, to have it all become a large disappointment is what truly killed her. For the two women, on opposite ends of the spectrum, love did not result in the manner most accepted or sought after, but resulted in the tragic manner of death. The morbid conclusion to each story is a direct result of the contrast both women pursued love. For Miss Emily Grierson, her desperation for love led her against society to a man who had publicly spoken against marriage. Her mental instability, fed by need, resulted in the disappearance, later discovered death, of Homer Barron. In common, both women were dictated by society on how they should behave. Miss Emily was of an upper ranking unsuitable for Homer Barron and Mrs. Mallard was to obey the mandate of rules society applied to her. Mrs. Mallard's death followed the great disappointment her husband's reappearance caused within her. Her true love for freedom and independence was bestowed and revoked in a day. Both women loved, and in the face losing love, reacted. For Miss Emily, this made her murderer, and Mrs. Mallard, the deceased. ...read more.