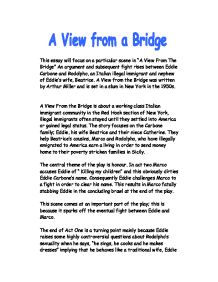 Focus on a particular scene in &quot;A View From The Bridge&quot;.

This essay will focus on a particular scene in "A View From The Bridge" An argument and subsequent fight rises between Eddie Carbone and Rodolpho, an Italian illegal immigrant and nephew of Eddie's wife, Beatrice. A View from the Bridge was written by Arthur Miller and is set in a slum in New York in the 1950s. A View From the Bridge is about a working class Italian immigrant community in the Red Hook section of New York, illegal immigrants often stayed until they settled into America or gained legal status. The story focuses on the Carbone family; Eddie, his wife Beatrice and their niece Catherine. They help Beatrice's cousins, Marco and Rodolpho, who have illegally emigrated to America earn a living in order to send money home to their poverty stricken families in Sicily. The central theme of the play is honour. In act two Marco accuses Eddie of " Killing my children" and this obviously dirties Eddie Carbone's name. Consequently Eddie challenges Marco to a fight in order to clear his name. This results in Marco fatally stabbing Eddie in the concluding brawl at the end of the play. ...read more.

He warns Eddie that he is a potential danger to him by raising a chair that Eddie fails to lift. Previously Marco has behaved in a more reserved fashion and had kept himself to himself. Almost as if he was in solitary confinement. In this part of the play Eddie behaves like a protective father, putting a curfew on the time that Catherine returns home. He also makes decisions about what men Catherine dates and what clothes she wears. He wants to control her life even though she is old enough to get married. Eddie goes on to say that he didn't "like the looks" that she had been getting in the "candy store". Furthermore he shows his disapproval about her waving to his friend Louis commenting "I could tell you things about Louis which you wouldn't wave to him no more". This suggests that Eddie at this point of the story is having trouble accepting that his niece has grown up and is becoming interested in men. He is also jealous of the relationship between Catherine and Rodolpho. It is apparent through Marco's behaviour suggests that he is getting sick and tired of Eddie's antics. ...read more.

Miller wants the audience to think that Marco is loyal and protective of his family. This is evident when he steps in to end the "sparring match" between Eddie and Rodolpho after his brother is punched The role of the family is one of the main topics to be addressed. This is particularly apparent when we see Eddie and Beatrice looking after their niece Catherine whose mother died when she was a baby. Love is also an important theme in this scene because of the love triangle involving Catherine and Rodolpho who are in love with each other. Furthermore Eddie who is secretly in loves with Catherine. This is evident by the way Eddie prevents Catherine from having relationships with men. The role of men and women in this scene can be linked to the traditional roles of the sexes at the time. The play was set when men were expected to go out and earn money for the family whilst women stayed at home as housewives. All of the elements I have above make this scene dramatically powerful and tense. Miller may have wanted this because this would capture the audience. This scene is important because the feud between Rodolpho, Marco and Eddie matures into a vendetta. EMMET MURPHY GCSE ENGLISH 2002 ...read more.