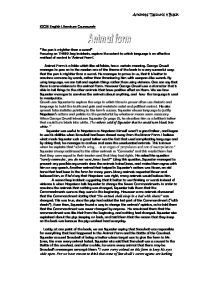 Focusing on THREE key incidents, explore the extent to which language is an effective method of control in 'Animal Farm'.

IGCSE English Literature Coursework ''The pen is mightier than a sword'' Focusing on THREE key incidents, explore the extent to which language is an effective method of control in 'Animal Farm'. Animal Farm is a fable which like all fables, has a certain meaning. George Orwell manages to pass on to the readers one of the theme of the book in a very successful way; that the pen is mightier than a sword. He manages to prove to us, that it is better to convince someone by words, rather than threatening him with weapons like swords. By using language, we can tell and explain things rather than using violence. One can say that there is some violence in the animal Farm. However George Orwell uses a character that is able to tell things to the other animals that have positive effect on them. We see how Squealer manages to convince the animals about anything, and how the language is used to manipulate. ...read more.

He asked the question "surely comrades, you do not want Jones back?" Using this question, Squealer managed to prevent any possible arguments since the animals hated Jones, and make them agree with him on any speech. Another animal that helped in Squealer's actions was Boxer, an old horse that had been in the farm for many years. Many animals respected Boxer and believed him, so if he'd say that Napoleon was right, many animals would believe him. A second key incident suggesting that it better to use thinking or words instead of violence is when Napoleon tells Squealer to change the Seven Commandments. In order to convince the animals that nothing was changed, Squealer tells them that the Commandments were as they were in the beginning. However some animals discovered that the Commandment stating that "No animal shall sleep in a bed with sheets" was changed. This was true, since the pigs had added the last part of the Commandment (''with sheets''). ...read more.

Later on, we see how powerful Napoleon is, while having Squealer with him. Squealer uses his ability in persuading when Napoleon orders a new meeting, where he tells the animals to talk about any actions they have done against him. At this point, Squealer manages to convince the animals confess their crimes telling them once more that Snowball was a traitor and that they should talk about anything they had done. This key incident is the most powerful example which suggests that the pen is mightier than a sword, since instead of convincing them with Squealer's propaganda, Napoleon could force the animals to confess their crimes, using violence. In conclusion, we can say that Napoleon uses Squealer to do what he wants and he knows that Squealer can convince anyone or at least influence anyone. From what we have seen, the pen really is mightier than a sword in the Animal Farm since every time Napoleon wanted to pass on something to the animals, he used Squealer's abilities in language, to do so. ?? ?? ?? ?? Andreas Tasouris 4 Black ...read more.