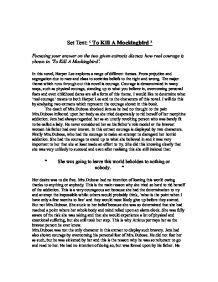 Focusing your answer on the two given extracts discuss how real courage is shown in &amp;#145;To Kill A Mockingbird&amp;#146;.

Set Text: ' To Kill A Mockingbird ' Focusing your answer on the two given extracts discuss how real courage is shown in 'To Kill A Mockingbird'. In this novel, Harper Lee explores a range of different themes. From prejudice and segregation due to race and class to societies beliefs to the right and wrong. The major theme which runs through out this novel is courage. Courage is demonstrated in many ways, such as physical courage, standing up to what you believe in, overcoming personal fears and even childhood dares are all a form of this theme. I would like to determine what 'real courage' means to both Harper Lee and to the characters of this novel. I will do this by analysing two extracts which represent the courage shown in this book. The death of Mrs.Dubose shocked Jem as he had no thought to the pain Mrs.Dubose inflected upon her body as she tried desperately to rid herself of her morphine addiction. Jem had always regarded her as an utterly revolting person who was barely fit to be called a lady. He never considered her as his father's role model or the bravest women his father had ever known. In this extract courage is displayed by two characters. Firstly Mrs.Dubose, who had the courage to make an attempt to disregard her horrid addiction. She had the courage to stand up to what she believed in and it was very important to her that she at least made an effort to try. She did this knowing clearly that she was very unlikely to succeed and even after realising this she still insisted that: " She was going to leave this world beholden to nothing or nobody. ...read more.

Finally the men and Mr.Cunningham had seen sense and decide to make their way home. It was not until they reached home that Scout understood the danger and violence of the evening. She was courageous enough to barge in to a large crowd of people, start a conversation with a member of the crowd she barely knew and give him advise on entailments. All of this was said consciously, but sub-consciously towards the situation. Scout was not the only member of the Finch family to display courage. Nearly all the characters in this scene besides the mob showed some form of courage. I thought Jem in particular showed the most courage by demonstrating moral courage. This is because, never had Jem challenged Atticus's command or disobeyed his wishes. Jem stood up to the man he feared enough to return to the Radley place to retrieve his ripped pants. Jem took his step understanding fully what punishment he would be likely to face. He knew the danger of the current situation, yet he still decided to disobey his father and put everyone's life in danger. This included his own life, Atticus, Scout and Dill's life at jeopardy. He had an idea of what is, or may happen but he still refused to leave. Jem is a boy who has great respect for his father and will obey his father even if he is wrong. He has so much respect that he will never answer back to his father no matter what happens, yet on that night he completely went against his father's wishes. In this scene we see a more matured Jem unlike the Jem that was first introduced to the reader in the beginning of the novel. ...read more.

He went on trial for a crime he had not committed and spoke the truth even though he would be called a liar. He entered the court knowing he did not have a chance to win. He pleaded his innocence and put his word against a white mans. This takes a lot of strength to do so, because at this time racism was extremely high and no Negro would ever deny such a charge in font of a dominant white society. He could have admitted the crime and be sentenced, but he was brave enough to try, similar to Mrs.Dubose. I thought that Scout was also extremely courageous because she restricted herself from fighting and got labelled as a coward. For Scout's character this task must have been very challenging as she is used to the idea of fighting with anyone in order to defend her pride. Unlike Jem, Scout had not yet reached the level where she was able to determine the requirements of a sensible action. For her to restrict herself from fights and hold her head high whilst other children refereed to her father as a 'nigger lover' is not as easy for her as it would be for Jem. Fighting being a natural reaction for Scout especially when it comes down to defending her family members and pride, just like it would be for anyone who valued their family. She did this because her father had asked her not to fight despite what the children at school said about him. This not only indicates her level of courage, but also her respect for her father. In conclusion to this essay I have determined that some of the characters in this book display courage, but they are often unnoticed, whilst others shine through and they are prised highly. ...read more.