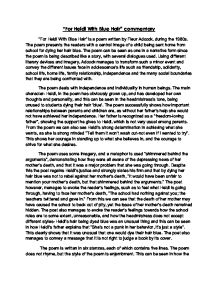 For Heidi With Blue Hair Commentary

"For Heidi With Blue Hair" commentary "For Heidi With Blue Hair" is a poem written by Fleur Adcock, during the 1980s. The poem presents the readers with a central image of a child being sent home from school for dying her hair blue. The poem can be seen as one in a narrative form since the poem is being described like a story, with several dialogues used. Using different literary devices and imagery, Adcock manages to transform such a minor event and convey the different issues face in adolescence's life such as friendship, solidarity, school life, home life, family relationship, independence and the many social boundaries that they are being confronted with. The poem deals with independence and individuality in human beings. The main character- Heidi, in the poem has obviously grown up, and has developed her own thoughts and personality, and this can be seen in the headmistress's tone, being unused to students dying their hair 'blue'. ...read more.

not to rebel against her mother's death, "It would have been unfair to mention your mother's death, but that shimmered behind the arguments." The poet however, manages to evoke the reader's feelings, such as to feel what Heidi is going through, having to face her mother's death, "The school had nothing against you; the teachers twittered and gave in." From this we can see that the death of her mother may have caused the school to back out of pity, yet the issue of her mother's death remained hidden. The poet also manages to evoke the reader's feelings towards how the school rules are to some extent, unreasonable, and how the headmistress does not accept different styles- Heidi's hair being dyed blue was an unusual thing and this can be seen in how Heidi's father explains that "She's not a punk in her behavior, it's just a style". ...read more.

This was obviously referring to either the color of her eyes, or the makeup, and shows how the poet was trying to obtain justice for Heidi, and that it was not fair for them to judge her base on her appearance and individual taste of dying her hair blue. Dialogues in the poem are made use of to convey certain messages, such as in "She's not a punk in her behavior; it's just a style." From this the author manages to question the readers whether the appearances could clearly present the personality of a person, and how sometimes one should not be judged by his or her appearance. In stanza 2, the poet states "although dyed hair was not specifically forbidden", from here the poet again raises the question of whether or not this is really a rule or an excuse. In the last stanza, the poet uses irony, by having Heidi's friend color her hair "in grey, white and flaxen yellow" which were "the school colors precisely". ...read more.